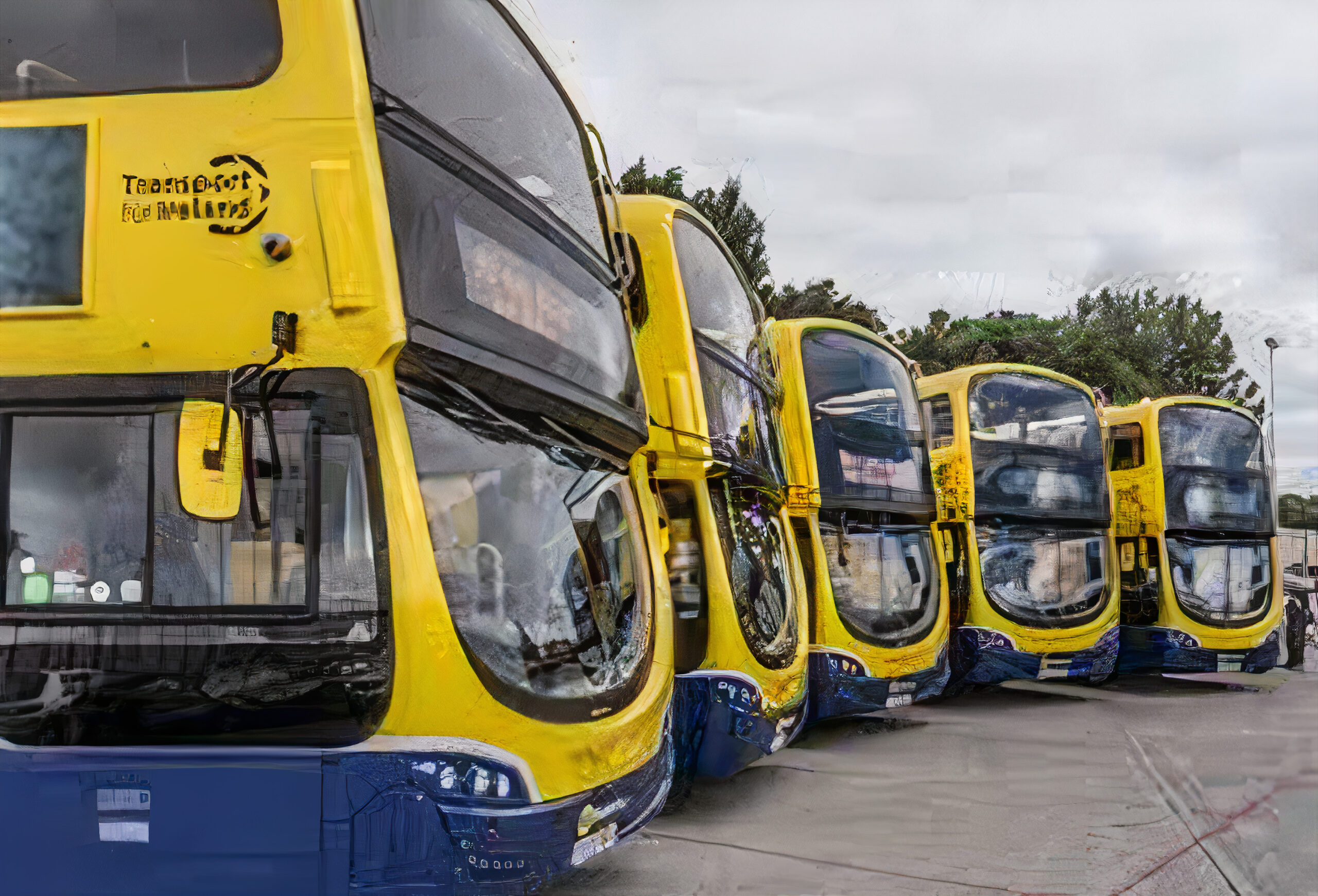 Where public transport isn’t as available as it needs to be to “beat the car” – especially in rural areas – electric cars should be encouraged as an alternative.

Dr Caulfield said that “when you look at transport, you look at an avoid-and-shift principle – an idea for planning that focuses on reducing travel or trip length, moving people towards more environmentally-friendly modes of transport when they are travelling, and improving vehicle and fuel efficiency, as well as public transport.”

“When you start to shift it then, you move them on to hopefully walking and cycling – they’re the gold standard, that’s what we want everyone to do because there’s zero emissions and it’s very low cost in terms of investment. If that’s not viable – and for many people it’s not – then we push them onto public transport.”

In particular, Dr Caulfield said, Ireland needs to pay more attention to sustainable transport in rural areas, stating “that’s where the emissions are. Outside of Dublin, people take longer trips and there isn’t an alternative to cars.”

“We may never get to point that public transport services in rural Ireland will be flexible enough to beat the car, and we also need to make sure that the car that they’re in isn’t a diesel banger. It needs to be an electric car and that’s the key part to reducing emissions.“

“We need to consider from a carbon perspective that if we provide fleets of buses in rural Ireland and they’re driving around with two or three people in them, that means that the carbon they’re producing per passenger is higher than perhaps it would have been by driving in their car.”

In cities, there is the need to consider giving space to public transport, cyclists and pedestrians rather than cars; bringing projects like MetroLink, Dart+ and the Luas extension to fruition; and making electric bikes more widely available.

Dr Caulfield said, “55% of people [travelling into Dublin] are using public transport. If this was a general election, public transport would win and it would be able to do whatever it liked, and that’s the key – that it gets the space, gets the priority, and gets the advancement.”

Ireland has set a target to reduce 51% of carbon emissions by 2030.

On buses, a major problem for wheelchair users is a lack of space, with Dublin Bus services only having capacity for one wheelchair at a time.

“I’ve had a few experiences of it lashing raining, the bus finally pulls up, but there’s already another wheelchair on it, so I have to sit there and wait for the next bus,” Ní Hoireabhaird said.

She said that trains are slightly better and that the Luas is the best option from her perspective as a wheelchair user when travelling in Dublin city centre, but that other issues – like needing to call ahead to notify a train or bus that a passenger uses a wheelchair – create challenges, especially outside of Dublin.

“Giving notice is something I’ve a lot of trouble with. There’s no sense of spontaneity. I can’t just hop on a bus or a train,” Ní Hoireabhaird said.

However, Ní Hoireabhaird said that she has experienced difficulties with staff members who aren’t aware of how to engage with a wheelchair user as a passenger on public transport.

On Nassau Street in Dublin, for instance, which is served by a large number of bus routes, Ní Hoireabhaird said that the path can be uneven and that sometimes a driver will open the ramp in front of an obstacle like a lamppost.

Making public transport more accessible will be a combination of better transport planning and design, improving infrastructure, and staff training.

Ní Hoireabhaird said, “issues like expanding space, it definitely can’t be done overnight, it’s more of a long term issue, but things like awareness training and educating staff members, that can be done very quickly and easily. Being more aware, being more conscious is something that could be easily done.”

“I think if the people designing these buses or the government were to put themselves in the shoes of disabled people and have the mindset of ‘is this accessible for a wheelchair user or someone with mobility aids’ that would be very helpful.”

Neasa Bheilbigh is a cyclist and teacher in Co Galway. She is the vice-chair of Cyclist.ie and a member of the Galway Cycling Campaign and the Galway Cycle Bus, a guided group cycle for children going to school.

For Bheilbigh, a major way to improve links and make walking and cycling easier is through permeable planning.

Permeability is a measure of how easy it is for people to move from one place to another, particularly in terms of whether urban or suburban areas, like estates, are connected to each other in a way that allows simple access between them on foot.

“That means you can walk from one estate into another. A little boy can go and visit his friend’s house in the next estate without having to go out on the main road. There might be an alleyway or an opening between two greens that he can walk through to get to his buddy’s house,” Bheilbigh said.

“But where there’s poor planning, what you have is that all the estates are closed off in cul-de-sacs. You have to drive out of one, go all the way around, and drive into the other. The only entrance or exit into those estates is shared with cars.”

She said that creating links between areas like estates can be done in a socially secure way.

“I understand that in the past they built these alleyways and they were narrow and they weren’t done through a gender lens, they weren’t thinking about how a woman would feel walking down this alleyway at night or people letting their children down it, and they probably attracted some anti-social behaviour”.

Additionally, Ireland needs to put in covered, secure bike parking near homes and well-designed bike shelters beside bus stops, as well as making walking and cycling safer for children, she explained.

“We probably need to get a bit of a big stick out now and say it’s not acceptable for parents to park on footpaths, it’s not acceptable for them to park anywhere near zebra markings or on double yellow lines. We need protected zones around schools where children can approach schools without having extra traffic there,” Bheilbigh said – and those measures need to be enforced by local councils, rather than it being left to school principals.

“We find with the cycle bus, the little bit of activity in the morning has a huge effect. I worked in learning support for a couple of years and a lot of children started cycling to school on the cycle bus. The impact was amazing. Their focus, their stamina throughout the day was much better on days that they cycled and their behaviour was much better.”

Ciarán Meers of the Cork Commuter Coalition says that encouraging people to take public transport in Cork means looking at new ways of getting places – including light rail.

Plans are in place to develop a Luas in Cork by 2040, which Meers said is an important step for transit, but that the city still needs to think bigger.

“If you look at other cities that match the national role that Cork would play as the second city of a nation, as well as being similar in terms of population and geographic area, you see places like LeHarve in France,” Meers said.

“It has roughly the same population as Cork, but it has things like multiple light rail lines, a commuter network that goes beyond anything that is in the scope for Cork city over the next while.”

Outside of the city, transport links in rural Cork are not a viable option for many living in the county.

“There are lots of towns in a position where people are forced into relying on cars because there’s no connections to either the city or to other nearby towns or villages,” Meer said.

Additionally, counties like Cork along the coast should look at utilising waterborne modes of transport.

“One thing that would be good for Ireland to experiment with in terms of getting different ways that people might use public transport is a water taxi,” Meers said.

Morton O’Kelly is a professor at Ohio State University and a former director of its Centre for Urban and Regional Analysis. He studied for his Bachelor’s degree in University College Dublin and has researched transport in Ireland.

His key advice is for Ireland to approach transport planning with an ambitious vision and “recognising that transport ties things together and having a good transport system can really be a huge boost to an economy and to its development”.

Ireland should “think of mobility as a thing that gets people to where they go, whether that be by bus, bike, pedestrian walking, taxi, Uber, the whole spectrum, and thinking seamlessly between those different modes would be a real breakthrough”.

“Ireland has made some tremendous progress and if you take the long-view, 2050 seems like a long time away, but if we don’t start now, we won’t be able to get to that next stage with new levels of mobility,” O’Kelly said.

He said it would “be great if we could get a handle on that and make sure people don’t have to spend two hours commuting”.

“In Germany, rail and air and auto are almost thought of as part of the same thing. In the airport in Frankfurt, it’s possible to get on a connecting train and travel to Heidelberg or travel to other parts of Germany relatively without even thinking about it, it’s almost part of the same system.”

“Ireland doesn’t have quite the same view, but integrating the airports, integrating regional airports, tying together – to take advantage of some of the tremendous tourist assets the country has – and provide access. It would be a game-changer for the next fifty years.”