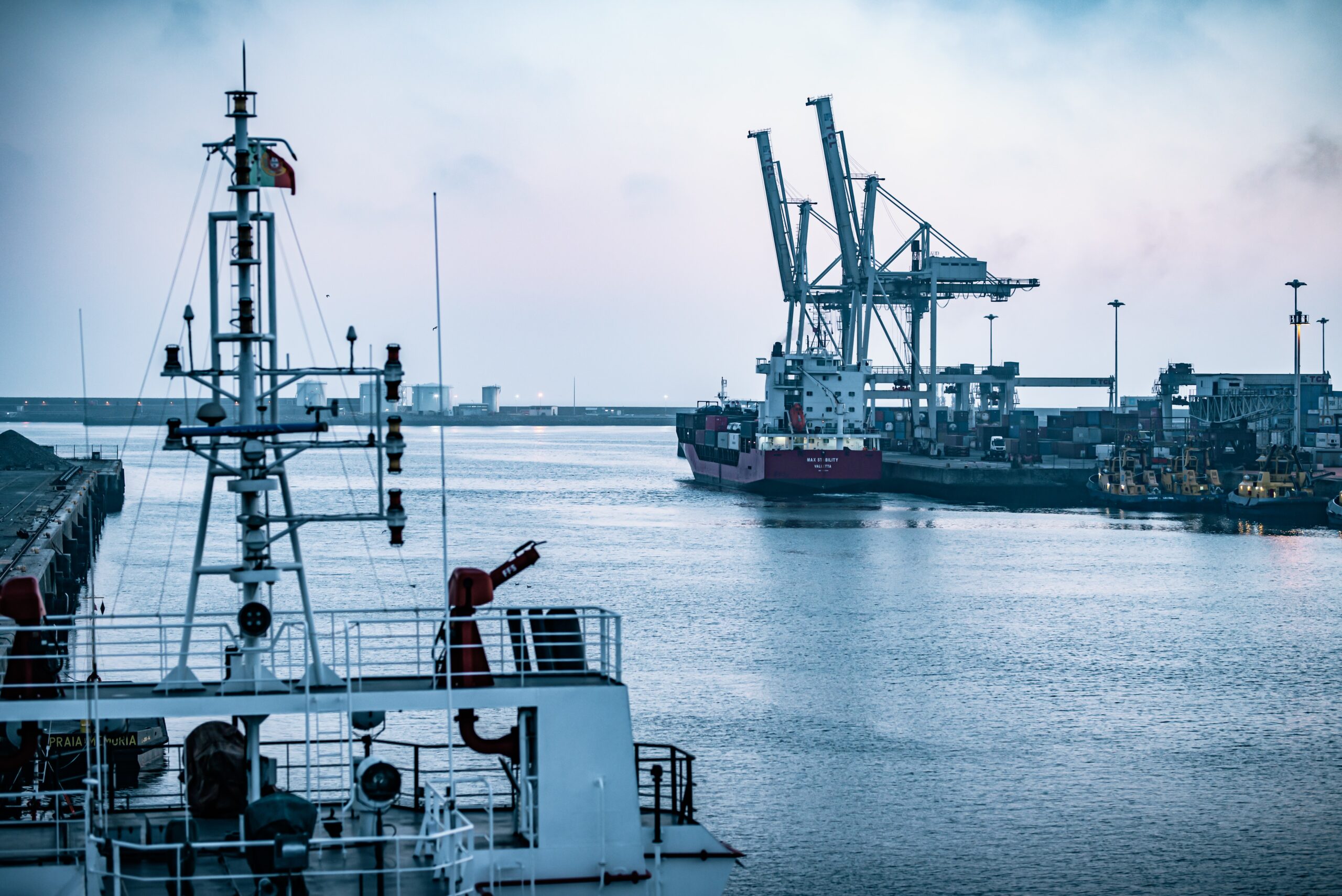 When Brexit became a reality on January 1st, 2021, it was clear that the network of scheduled freight shipping routes and services linking Irish Ports with British and Continental European Ports would change significantly. It was also clear in the run-up to “Brexit Day” that the implementation of new trading rules with Great Britain would not only affect the flow of traffic between Ireland and Britain but would also reduce the predictability of ferry-based services operating to and from the Continent using the British Landbridge.

High profile ferry service changes were particularly in evidence at Rosslare Europort, where Stena Line increased their schedule of sailings to Cherbourg to six departures weekly, DFDS introduced an eight times weekly Rosslare to Dunkirk service and Brittany Ferries added a weekly Rosslare to Cherbourg service increasing the utilization of their ferry used for the twice-weekly Rosslare to Bilbao service.  Irish Ferries added extra capacity to their Dublin to Cherbourg service, while CLdN opened a twice-weekly Dublin to Santander operation and added substantial capacity on the Dublin to Rotterdam, Dublin to Zeebrugge and Cork to Zeebrugge routes.  No operator made any significant changes to services on the Ireland/Great Britain routes.

Six months later and, despite the ironing out of many of the wrinkles that caused such significant issues for Hauliers operating to and through Britain, traffic has continued to grow on the direct services to the continent and has stabilized on the Britain services. DFDS has reduced the Dunkirk service to five sailings from Rosslare each week, more, perhaps a reflection of a tough vessel charter market than any fall-off of traffic, and another new entrant to the Irish Ro-Ro service market, Grimaldi Lines has opened a twice-weekly Cork to Antwerp service. One significant change on the Irish Sea services has been the growth in traffic running into Belfast and Warrenpoint requiring the addition of further capacity. Irish Ferries has introduced five times daily Dover/Calais ferry service on 29th June offering a daily capacity in each direction of about 650 trailers.

The traditional ferry economic model shows freight traffic as being the “bread and butter” of many services while the “jam” is provided by tourist passengers. Lines have had to hold their summer schedules in abeyance until to COVID-19 linked travel restrictions are lifted. The COVID restrictions in place have meant that, in fact, the passenger cabins on many ferries have been used by drivers up to now, but as the swing to unaccompanied trailer operation by many Hauliers takes greater hold, this requirement will not be as significant.

The pickup of traffic and new schedules on the Lo-Lo containers services has also been strong and spread across the ports of Dublin, Waterford, and Cork. Eucon has added extra capacity and sailings within its Ireland/Benelux network, Containerships/CMA-CGM, links Dublin and Cork with Dunkirk and Rotterdam, as well as Dublin with several Spanish ports, Samskip has launched a Dublin/Waterford/Amsterdam service linking with the Company’s eastern European and further afield services, while the DP World subsidiary, Unifeeder has opened a Belfast/Cork/Southampton service.

Independent Container Lines (ICL) had added a Cork call on the westbound leg of its weekly Antwerp to the US East Coast ports of Chester and Wilmington in June 2020, a call that has proved to be very successful giving a “no transhipment” service for both containers and Less Than Containerload (LCL) cargo, particularly that shipping westbound.

During 2019, the global Deepsea container shipping services network operated relatively smoothly with minimal port delays and container and shipping capacity constraints. The major issues of concern were the “greening” of international supply chains and improving their efficiency based on the development and exploitation of IT resources.

From the outset of the COVID-19 pandemic in early 2020 problems began to emerge. The immediate closedown of many production facilities in Asia as the pandemic spread slowed the shipment of goods to, in particular, Europe and North America and also the discharge and delivery of containers laden with cargo at Asian Ports. Later, as Asia picked up, other economies slowed.

When an element of normality returned ports was congested, containers were on the wrong side of the globe and shipping schedules were completely disrupted. These difficulties persist, the major Chinese Port of Yantian has only in the last week returned to operation having been closed by a further COVID outbreak and Lines have altered some schedules to skip out Ports which are subject to backing up of vessels. Ports being skipped include Rotterdam and Le Havre on either inbound or outbound voyages. In the case of Ports within Europe, the Brexit ripples have added to the difficulties with ports, including Dublin, under significant space pressure leading, in that case, to the temporary suspension of the container rail service feeding traffic to and from Ballina. The building of containers which is totally concentrated in China ground to a halt in 2020 and is only now being ramped up again. Add to this, examples of further disruption such as the grounding of the Ever Given with some 18,000TEU on board which took place in March, but the vessel has only been released to sail onward to Europe within the last couple of weeks.

All these factors have led to a huge increase in ‘spot’ container rates with rates reaching five times the 2019 rate on Asia-Europe traffic as well as a huge spike in vessel charter rates applying to not only the large Deepsea vessels but also the smaller feeder service vessels. Throughout the Spring and early Summer, the conventional wisdom has been that these rates levels will drop back but this is far from happening and it now appears likely that the very high rates will apply well into 2022. In the case of containers loading temperature-controlled cargo, the same pattern of rates has occurred but not to such an extreme level.

It is worth pointing out, however, that the major cargo movements are done under contract rates agreed by the shipper or Forwarding Agent with the Carriers. The 2021/2022 rates revisions have shown increases but nothing like those for the ‘spot’ market. Also, a few Lines have been shifting away from being simply Deepsea quay to quay operators to offering contracted shippers’ door-to-door packages with certain rate and service guarantees.

While ocean freight rates have soared, the costs of operation for the Asia/Europe container rail services have, if anything, dropped with Shipping Lines, Forwarders and some manufacturers chartering complete trains to move significant cargo volumes. The development of services from Ireland to ports such as Amsterdam and Dunkirk make accessing these rail services easier to do and the use of such systems is well worth exploring.

Not directly related to this, but very much to be welcomed is the re-start of Irish Rail’s Ballina/Waterford Belview container rail service, this time the trains are chartered by XPO. Both Transport Minister Ryan and Irish Rail have been giving strong commitments to the significant development of the carriage of freight ln the Irish rail networks in line with the EU climate change agenda.

As long as the COVID-19 related travel restrictions remain in place throughout Europe and further afield, the process of normalizing the airfreight activity remains difficult. When passenger traffic does return it is likely to do so with airlines flying the more economical narrow-bodied aircraft rather than the widebodies previously used for, to take an example, Trans-Atlantic travel.  The freight capacity of the narrow-body aircraft is significantly less.

It is unclear what the new air freight model will be, but it is likely that more freight will be transshipped by the specialist freight carriers via Continental European airports. Increasing numbers of exporters that have always used air freight as their route to market have been trialling the use of surface transport with, in many cases, good results in terms of the door-to-door transit time.

NTA Signs Framework Agreement For Up To 200 Fully Electric Buses