There was a great turnout at the CILT, BWG site visit to Kilcarbery Dublin with thirty five members in attendance. First impressions of the site are extremely impressive and it was a hive of activity with trucks and trailers being loaded and unloaded. Peter Donohoe ( Operation and HR Director ) greeted all and did a presentation which outlined BWG Brands – Spar ,Eurospar , Spar Express ,Mace XL Symbol stores along with 22 Value Centre Cash and Carry outlets around Ireland. The BWG group is a totally Irish owned company and celebrated 50 years in business in 2013. BWG employs 900 people directly and 20,000 through their retail estate and also relationships with 400 suppliers and serve over 1 million customers every day.

The National Distribution Centre was a massive logistical operation with a multidepartment project team which involved the consolidation of three satellite depots in, Limerick, Walkinstown and Ashbourne. All ambient and Wines and Spirits orders are delivered from the NDC to 870 stores completing 2,676 deliveries per week using 25 vehicles covering Dublin and Leinster regions and using Third party hauliers in Cork, Limerick and the North West.

The NDC picked and delivered its fi rst case on 3rd September 2012. Since then the average weekly throughput is 500,000 cases per week, service level has been consistent at 99.3%. There is 106 staff in the NDC covering 5 x 24 hours of operation. Peter told the group the secret of the NDC success was to “do the basics right “along with being totally customer focused and maintaining the flexibility to deal with any surges in volume.”

BWG are a people focused company and their Mission values and Vision are embedded in the culture of the organisation and at the official opening ceremony there were six members of staff with 236 years’ service between them. We then went on the grand tour and split into groups lead by Joanne Mellon (the NDC Operations Manager) and the Management Team. The Depot is 250,000 sq. ft. has 26,000 pallet spaces with 7,000 pick faces and 6,000 product lines.

The operation is paperless and works on a voice picking system, this was indeed state of the art and looked every bit of it. There was a genuine buzz around the place everyone working methodically and with energy. A lot of the group commented afterwards on the cleanliness and tidiness of the depot while in full working mode.

We then visited the bonded area – which is one of the largest independent Bonds in the country which holds beer, wines and spirits under bond and on the day was holding 225,200 litres of wine! Duty is only paid when product is sold and leaves the Bond so this is a highly regulated and security conscious area.

We then returned for a hearty breakfast and discussion and the general consensus was of a best in class facility managed to the highest standards by Joanne and her Team. Finbarr Cleary then presented to Peter and Joanne and thanked them for facilitating the CILT visit. Visiting you local Spar or Mace will never quiet be the same again! 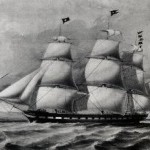 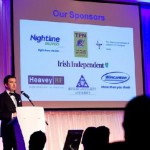