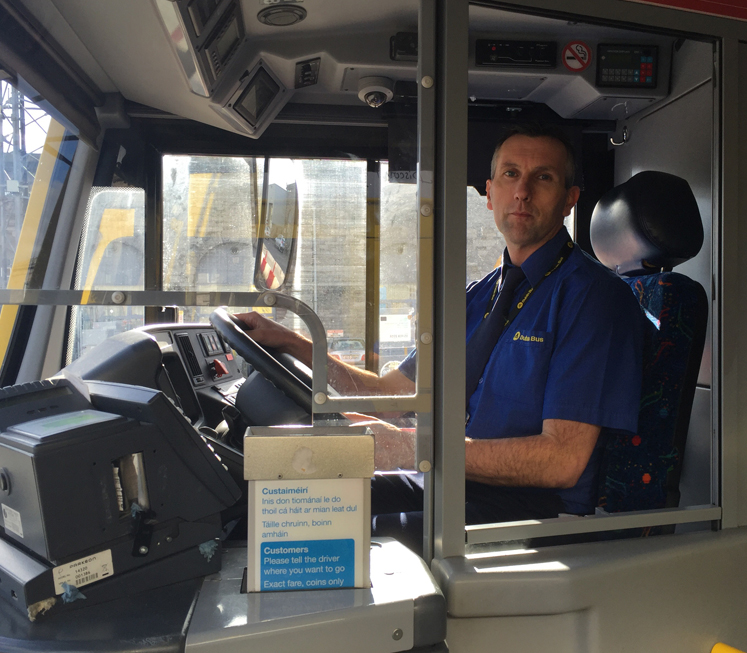 Bernard Fox has been driving for Dublin Bus for the past 15 years. He sat down with Linkline to chat about daily life behind the wheel, experiences with passengers and the challenge of training new recruits.

Commuters travelling into Dublin from Balbriggan each day might recognise Dublin Bus driver Bernard Fox as a familiar face from their route. Not that he’s picking anyone up; on the 28km stretch of road from Balbriggan to Harristown garage Bernard doesn’t think about passengers.

As a keen cyclist this daily dose of exercise helps him clear his head and prepare for the day ahead. Maintaining composure is a crucial part of the job, benefitting both him and his passengers alike.

“The first thing you’ve got to do is relax.” Bernard says. “The world will keep spinning. You can’t control everything, so there is no point in trying to do so. If you’re relaxed, your passengers will feel relaxed, and you’ll feel less stress on yourself, so the first thing you do is relax. You take your time, you chill out, and you live in your mirrors when you’re driving a bus.”

Bernard joined Dublin Bus back in 2002. “I came in as a car driver with a B licence and they trained me up to a D licence. I’ve worked as a member of the customer focus team and the energy saving team but my latest role here is as a part-time instructor. I’ve been doing that for the past 12 months.”

Before joining Dublin Bus Bernard ran his own business manufacturing toiletries and cosmetic products, but after six years the business went bust and he had to search for something new. “Dublin Bus was running a big recruitment drive at the time. I’ve never had any intentions of being a bus driver but they were recruiting like mad so I came in here and I’ve just embraced the place totally. It’s a great place to work.”

For him, joining Dublin Bus was a completely new challenge. “I was always in some kind of management role. Coming from having my own business and being self-employed to working for someone else was a big change.”

However, like many of his colleagues, he was able to put his past experience to good use. He is now a qualified ADI instructor, and when he’s not driving a bus himself he’s training the new recruits how to do so.

In 2007 Bernard went back to college to study for a diploma. He subsequently went on to complete a degree and then a Masters in Business Studies. This has helped him to build on his leadership skills and it has also benefitted the company:

“I did my thesis on leadership and the style of leadership Dublin Bus would need to adapt if we are to implement sustainable practices.”

Along with the theoretical challenges of leadership Bernard has to deal with the practicalities of manoeuvring a 35 foot vehicle, filled with passengers, through the often labyrinthine streets of Dublin. “I drive out in the bus in the morning and I don’t know what’s going to face me on any given day. Anything can happen. There could be a protest march on in the city, roadworks or anything. It’s a challenge.”

But it’s clearly a challenge that he relishes: “There is nothing more enjoyable than being able to manoeuvre a bus around some tight corner.” He also likes the comfort of having an entire team working behind the scenes with him while he’s out there.

“The driver is there at the front line for everyone to see, but behind us we have clerical, we have maintenance, and we have central control who we constantly liaise with.”

Dublin Bus drivers get to know the city like no one else and this can bring with it the good and the bad. For Bernard, one of the hardest parts of the job has been seeing the homeless crisis develop.

“It’s horrific sometimes seeing the people out there. And it wouldn’t just be single men; it’s whole families out there now. You see them queuing outside the McVerry Trust for food parcels, and this is in modern Ireland. But it’s a part of the challenge. It’s something that we always deal with. We have to deal with it.”

On the other hand, working so closely with the public has been a very positive experience for Bernard. Driving the same route each day means it’s easy to build friendships with passengers.

He recalls one lady in particular who he helped: “There was a lady on my bus one day who just sat there on my last stop. I thought she had missed where she was meant to get off or something so I asked if she was ok? She said ‘Ah yeah, I’m grand. Have you got a few minutes?’ I say yeah, no problem. So she says ‘These bags are heavy, can you give me a hand to carry them?’ I shut the bus down, secured the vehicle and I got out of the cab. There I am walking down the road in my high vis vest with these shopping bags, and people are going by wondering what a bus driver is doing walking down the road carrying this lady’s bags for”.

Bernard got to know the passenger over the coming months: “Every week on my route I met the same lady and we went through the same routine. We chatted and I learnt a bit about her family and she learnt a bit about mine. I never even got her name, I just knew her through our little walks, and then on Christmas week she turned up on my bus with a Christmas cake she made for me. This is the kind of nice story that sticks in your head as a driver.”

Bernard’s big focus right now is on his new recruits: “You get six recruits per class and your job is to turn them into the drivers they need to be. A lot of car drivers come in and they think they’re expert drivers; then when they get on the bus it’s a whole new story.” Safety is a key priority and new recruits must be twice as focused than any other driver on the road.

“We teach them to scan the road ahead. A lot of car drivers just look at the car in front, we tell them to look up the road as far as they can see, scanning the whole time. So if they see brake lights ten cars ahead they have to gauge that, and be braking long before the car ahead of them does.

Bernard derives great satisfaction from helping new drivers progress. “It’s like a journey with them”, he says. “On week one you’re constantly talking to them and telling them what to do from the instructor’s seat, then all of a sudden it kind of clicks with them, and you’re withdrawing more and more and letting them make their own decisions.

Then by week three, before they go for their test on week four, you’re just tweaking them, you’re getting them right. It’s a lovely thing to see people maturing and getting into it.” For anyone who wants to become a driver Bernard’s advice is simple: “If you want to get into this company, the first thing
you’ve got to do is like driving, and like people, and you’ve got to like the challenge, because the city will throw up anything at you, on any given day.” 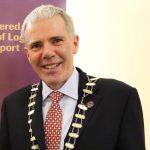 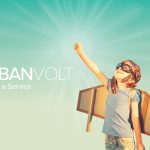