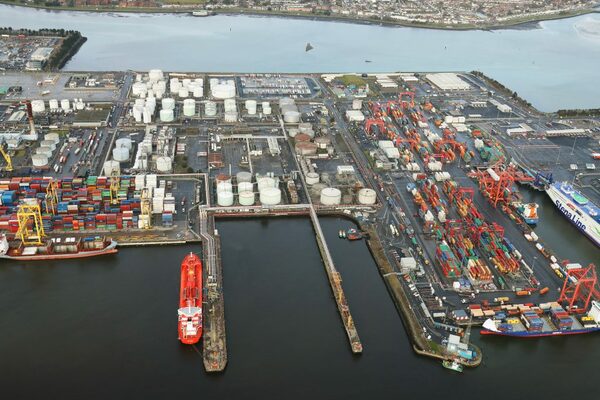 Dublin Port Company has reported trading and volumes figures for the first quarter of 2022.

Bulk Liquid imports of petroleum products returned to the pre-pandemic record levels of 2019 with strong growth of +20.2% to 1.1 million tonnes emphasising Dublin Port’s importance as a national energy hub.

Outside of Dublin Port’s cargo business, passenger and tourism volumes have partially recovered post-pandemic.  Passenger numbers on ferries (including HGV drivers) increased by more than 150% to 209,000 while tourist vehicles more than doubled to 58,000 (+238%).

However, both passenger numbers (-23%) and tourist vehicle volumes (-29%) remain significantly behind their pre-pandemic levels of 2019.

“This recovery was driven, in large part, by the +23% growth to 192,000 units in freight volumes on services to the ports of Holyhead, Liverpool and Heysham.  However, volumes on these routes are still -18% below their pre-Brexit levels. Elsewhere, volumes of trailers and containers on services to the EU and beyond – which had increased by +18% last year – grew in the first quarter of 2022 by a further +2% to 171,000 units.”

“Imports of petroleum through Dublin Port account for nearly one-third of all of the country’s energy needs and, in the first quarter, volumes of petrol, diesel and other fuels increased by one-fifth. Dublin Port’s last record year was 2019 and volumes in the first quarter of this year were -8% lower than they had been three years ago.  The level of growth we are now seeing at the start of 2022 suggests that record throughput levels will again be seen by 2023 or 2024.  This growth maintains the pressure on us to continue to deliver our large capital programme at pace. This will not be easy against the background of high inflation which is particularly evident in the construction sector.”