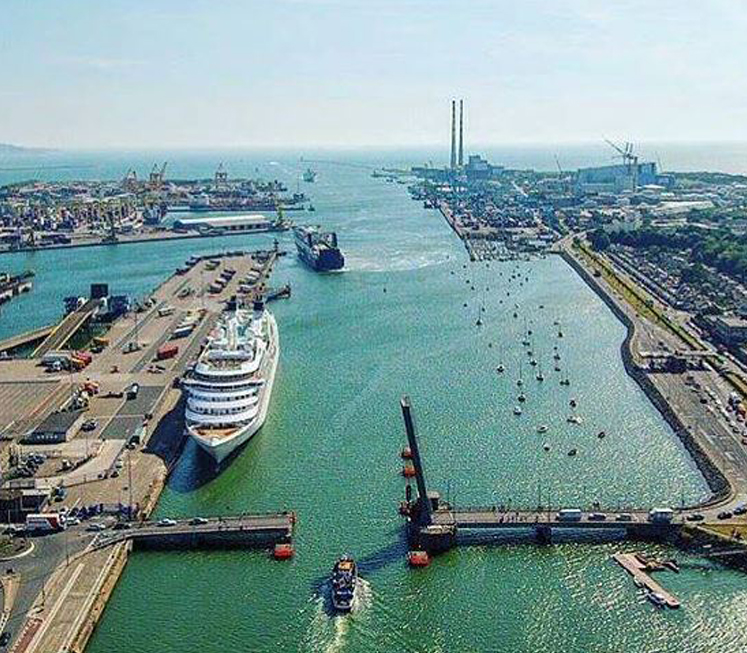 Last year witnessed the growth of 4.3% for a third successive year.

Investment in Dublin Port infrastructure continues to accelerate to meet demand. The latest figures for last year show that cargo volumes through Dublin Port hit record levels for the third successive year with growth of 4.3% to reach a new record level of 36.4m gross tonnes in 2017. This brings overall growth at Dublin Port in the five years since economic recovery began in 2013 to +30.1%.

To facilitate future growth, Dublin Port continues to invest in new infrastructure based on its Masterplan to 2040 and a programme of works is already underway. Dublin Port Company invested €75 million in port infrastructure in 2017 and plans to invest a further €132m during 2018.  Thereafter, investment plans will need to accelerate to ensure that Dublin has sufficient port capacity for the years ahead. 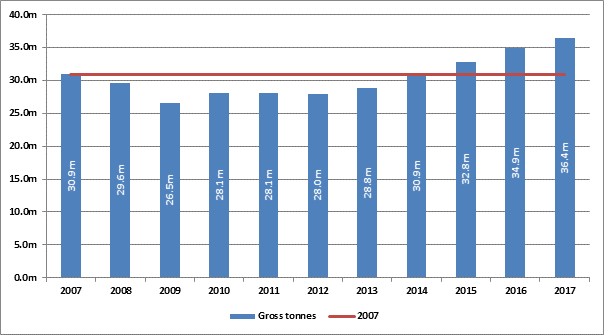 Imports of new trade vehicles were down by -4.6% in 2017, reflecting the large increase in used cars being brought into Ireland from the UK, driven by the weakness in Sterling. Year-on-year, the number of imported trade vehicles fell from 104,185 to 99,383.

In addition, Dublin Port’s cruise business grew strongly with 127 cruise ship arrivals and growth of 32% in visitor numbers, breaking the 210,000-mark for the first time. Importantly, cruise ships are getting bigger and the average cruise ship calling at Dublin Port increased in size by 13.3%, from 39,946 gross tonnes to 45,270 gross tonnes.

“Growth of 4.3% in 2017 confirms that the longstanding trend of compounding annual growth in Dublin Port is back.  Every year from 1993 to 2007 was a record year in Dublin Port. In the past three years we have seen this pattern re-emerge, with 2017 the third year in a row for record growth.  We are projecting another record year in 2018 with growth of about 5%. Dublin Port’s growth is driven by domestic demand and both population growth and a stronger economy will continue to drive volumes up for the foreseeable future.

“Dublin Port’s multi-million euro infrastructure investment programme is matching our customers’ continuing investments in new ships. Irish Ferries has committed €165m in a huge new ship for the Dublin-Holyhead route due by mid-2020.  Later this year, the €150m W.B. Yeats will commence a service from Dublin to Cherbourg.  In October last year, CLdN introduced the enormous 8,000 lane metre MV Celine on its Dublin to Zeebrugge / Rotterdam service.

“While Brexit brings uncertainties and challenges to our business, the combination of investments by our customers and by Dublin Port is underpinned by a shared confidence in the future.  Over the next two months, we will finalise our plans for the required re-introduction of border controls on trade with Britain and I am confident that the controls required will not significantly hinder the movement of goods or people through Dublin Port.”

Pharma.Aero Adds New "Heavy Weights" To Its Board