The Stena Superfast X is part of a family of ferries built by the Greek Ferry operator Superfast Ferries, and is a near sister of Stena Superfast VII and VIII, whom operate on the Belfast Cairnryan Route. While this ship is called Stena Superfast X, crossing times are on par with other traditional Superferries operating on the route. The name Superfast relates to an unique passenger focus offered onboard it over other ferries.

This ship replaced the smaller Stena Nordica and has tripled passenger capacity over its predecessor sailings, where it can carry 1,200 passengers. Freight space has being maintained at former levels, with over 2 km of lane space for vehicles contained onboard.

Due to high fuel costs and a changed marketplace over the last number of years, Stena Line have decided to pull its seasonal fast ferry HSS service from Dun Laoghaire, leaving the port without a car ferry service in 2015 for the first year in its history, since its construction in the early 18th Century.

Built in 1996, the HSS Stena Explorer replaced conventional ferry operation in Dun Laoghaire, the high speed craft, operated at its peak 5 round trips per day taking just 99 minutes port to port, operating at speeds at over 40 knots, using the marketing slogan, half the time, twice the service, replacing two ferries. Known by some as the Concord of The Sea’s, the HSS was a popular ship with passengers.

Over its life it suffered from its own success, firstly the craft was designed with an passenger focus with limited freight capacity, it was actually the first fast ferry in the world that could carry trucks. Tax Free Shopping was abolished in 1999, this effected passenger demand for the service and on-board margins. Also at this time with more intense competition with airlines significantly reduced air  fares between Ireland and the UK. The HSS was also a craft that burnt a significant amount of fuel and when fuel prices significantly increased, this gradually resulted in an reduced frequency and slower crossing times.

Dun Laoghaire Harbour will now focus on developing its cruise ship business and 2015 is set to be the ports busiest year yet for cruise ships. Permission has been applied for to constuct a jetty at the harbour to cater for Cruise Ship up to 450 meters. It remains to be seen if this project will receive permission, and even if so will it gain enough interest for Cruise Lines and investors to proceed into a viable, successful facility as it will be in direct competition with Dublin Port’s Cruise Terminal, near the 3 Arena.

Dun Laoghaire Harbour have also sought interest from interested parties in developing an replacement car ferry service or new alternative services, however it remains to be seen if crossing Irish Sea ferries ever operate from Dun Laoghaire again. One major issue with the port is lack of standage space for freight vehicles and poor road connectivity to the National Motorway Network.

As for Stena Line, Its an exciting time, they have made many investments of over €250 million on Irish Routes over the last five years, its purchase of Norfolk Line Irish Sea Ferries from DFDS Group in 2011 and Celtic Link Ferries in 2014, have developed its route network. Stena Line are offering a number of promotional offers currently, in relation to the introduction of the Stena Superfast X to the Dublin Port-Holyhead route and these are outlined on their website stenaline.ie. 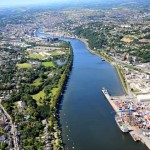 Port Of Call : An Interview with the CEO of the Port Of Cork