The next five years could see a real breakthrough for the viability of fully electric buses according to Dr William Wright CBE of the Wrights Group. Dr Wright made his comments as eight wirelessly-charged electric Wrightbus Streetlite EV vehicles are entering service with eFleet Integrated Service (“eFIS”), where they will operate in a groundbreaking trial in Milton Keynes, recently given the seal of approval by Transport Minister Baroness Kramer.

The trial, led by eFIS, an enabling company set up by Mitsui & Co Europe and design engineering consultancy Arup and supported by Milton Keynes Borough Council and the Department for Transport, aims to prove that low-carbon transport can be a cost-effective and efficient alternative to traditional diesel and petrol vehicles. The 86 year old former Chairman of the Wrights Group, who continues to play an active role in the company’s alternative driveline business unit, believes that fully electric buses have great commercial potential – something that he hopes that the data from the long term Milton Keynes project will substantiate.

“There is a parallel with the adoption of low floor accessible vehicles in the 1990’s” says Dr Wright. “Operators were initially reticent, but when evidence of rising patronage emerged – along with a reduction in the cost premium of vehicles as production volumes increased – low floor buses quickly became the norm. We sniffed out the market and were a good six months ahead of our competitors.”

A well-known and respected figure in the industry, Dr Wright’s interest in looking at alternatives to diesel powered buses originally stemmed, some twenty years ago, from seeing a jogger running through London wearing a facemask. As an asthma sufferer in his childhood, Dr Wright already had empathy with the issues surrounding air quality and soon began applying his engineering skills and commercial acumen to the problem. Since that fateful encounter with the jogger, Dr Wright has spearheaded the company’s development of hybrid electric technology over many years, the latest version of which now features in current Wrightbus products such as the New Routemaster in London and the StreetCar RTV in Las Vegas.

He has also played a major role in making the fully electric StreetLite EV concept a reality.“Clearly the data from the Milton Keynes project will be crucial in proving the viability or otherwise of fully electric vehicles on what is a particularly demanding route” said Dr Wright. “However I am optimistic for its prospects, particularly if broader automotive industry development of battery management systems continues at the right pace. I think the car manufacturers have an important role to play here, as customer demand will drive production volume.” His first ever car was a Morris Eight and in more recent times he has been a driver of a hybrid electric vehicle. However it is in a battery powered car that Dr Wright now makes his daily commute from home to the Wrights Group HQ in Galgorm, Ballymena.

“I plug the car in overnight and can currently get a 75 mile range out of it – if future automotive development sees battery performance improved so as to double the range, I think many people will start to look at battery-powered cars more closely. We already have car charging points every 20 miles or so here in Northern Ireland. Imagine if, say, in London electric taxis became a reality?”

Back on board his favourite mode of transport – the bus – Dr Wright sees the ability of Wrightbus to offer all three charging options – pantograph, plug in and IPT (Induction Powered Transfer, as in the Milton Keynes trail) on the StreetLite EV as a major advantage. “As always, it is down to giving operators scope to choose what best suits their particular operational needs and circumstances and how they want to approach the distance/batteries/ passenger capacity equation.

The drive technology is mature and already well proven, so I think the key challenge will be in the on-going development of battery technology rather than the method by which the batteries are recharged. For instance I watch, with great interest, the work which is being undertaken by the scientific community on sodium lithium batteries – I think this could be an exciting and fruitful area of research.” Dr Wright is justifiably proud that the company that bears his and his father’s name has become synonymous with innovation and has been particularly active in developing low emission bus technology.

“We have the knowledge and, in some cases the scars and as a business we have always re-invested a relatively high proportion of our turnover in R&D. We have always looked beyond the present, trying to identify what challenges our customers may face five, ten, even fifteen years down the line. Being a family run business and being able to take the long term view without the needs of external shareholders to satisfy has helped in this regard too.”

Heading up a family which now includes ten grandchildren and nine great-grandchildren and at an age when most people would have opted for retirement, Dr Wright remains as passionate and enthusiastic about his work as ever. Indeed his continuing work in championing engineering innovation was recently recognised by the Institute of Engineering & Technology, who presented Dr Wright with the IET’s first ever Northern Ireland Engineering Excellence Award.

“I am still very much a commercial animal and will be watching the Milton Keynes trial data with great interest. If we can get the daily operation of the vehicles foolproof, the ever rising cost of energy will help sell the concept to a wider audience. The potential is there and, with the right level of technological development and government support, I think electric buses could become a reality in many UK cities within the next decade.” 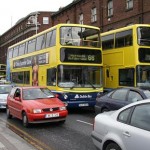