It was with great pleasure that the Institute welcomed José Viegas, Secretary-General of the International Transport Forum, to Dublin earlier this year. Mr Viegas was in Ireland to give a speech at the Transport and Climate Summit in Dublin Castle and, despite a busy schedule, we were fortunate to have him address a small gathering in The Alexander Hotel.

The event, organised by CILT Skillnet and the Department of Transport, Tourism and Sport, was heavily attended by Irish industry leaders who were keen to hear one of the world’s foremost transport experts.Mr Viegas began by briefly explaining the role of the International Transport Forum and the research, statistics and policy work that it is undertaking. An intergovernmental organisation with 57 member countries, the ITF acts as a think tank for transport policy.

It is the only global body that covers all transport modes and while it is administratively integrated with the OECD it remains politically autonomous. He told the gathering that the ITF acts as a platform for discussion and pre-negotiation of policy issues and highlighted its work in analysing trends, sharing knowledge and promoting exchange among transport decision-makers and civil society.

The ITF motto is ‘global dialogue for better transport’ and so each year it organises a summit of the world’s transport ministers. This year’s talks, to be held at the end of May, will explore the trends shaping transport governance, focusing on infrastructure, global connectivity, the right regulation for innovation, and urban access and mobility. Looking to the future of transport and mobility across Europe, the secretary general discussed the technological advancements being made not least in the area of automated vehicles. He told the audience that driverless trucks are inevitable and that it isn’t a case of if at this stage but when and how. “They will change the landscape of transport and logistics”, Mr Viegas said.

The ITF chief also briefly touched on Brexit and, while acknowledging it will have a major effect on the European transport and logistics industry, he predicted that it will be “a big earthquake but a positive one”. A Portuguese national, José Viegas had a distinguished career in academia and the private sector before becoming head of the ITF in 2012. He was Professor of Transport at the Technical University of Lisbon, served as Director of MIT-Portugal’s Transport Systems focus area and as chairman of TIS.pt Consultants, advised governments and international institutions on key transport projects and policies.

Since taking the helm at the international transport body, Mr Viegas has implemented new initiatives to increase value for member countries. However, it is the organisation’s environmental work, in particular that on shared mobility and its current major project on decarbonising transport which have been his main focus.

Transport activity currently contributes 23% of global CO2 emissions from fossil fuels, with this share expected to rise. The ITF Transport Outlook 2017 stated that continued strong growth in demand for mobility would mean that, even in optimistic scenarios, the carbon footprint from transportation in 2050 will still be at 2015 levels of around 7.5 gigatonnes.

The challenge for the ITF’s Decarbonising Transport project is to reduce transport CO2 without sacrificing the access and opportunities offered by transport, keeping our societies together and making our economies turn. Addressing the room, Mr Viegas stated, “the key is to close the gaps between commitments and delivery. It is now up to the transport sector to demonstrate how carbon-free mobility can be achieved”. He stressed that more robust mass transit systems need to be put in place and there needs to be radical changes in policy to make transport sustainable, including shared mobility such as flexible public transit systems and even fleets of self-driving cars that could be shared by users.

It is policy change not reliance on technological advancement, however, that will be the ultimate solution he asserted: “We need to accelerate and make radical policy choices to decarbonise transport. Technology will provide 70% of the possible reductions of carbon footprint to 2050. The rest will come from doing things differently and this is where there is still a lot of potential. We need to think more about shared mobility, new transport modes, etc.”

ITF’s work in this area is moving at a pace. They have already designed a model to reduce carbon emissions which will be available for countries to test as early as May 2019. It appears their objective to establish a commonly-acceptable pathway to achieve zero transport emissions by 2050 is well within sight. Following a short questions and answers session CEO Pat Treacy concluded the event by presenting Mr Viegas with a gift on behalf of CILT. Our sincere thanks to Mr José Viegas of the International Transport Forum for such a fascinating speech and to the Department of Transport, Tourism and Sport and CILT Skillnet for making the event possible. 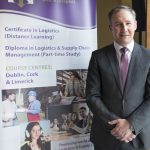 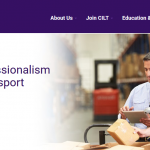