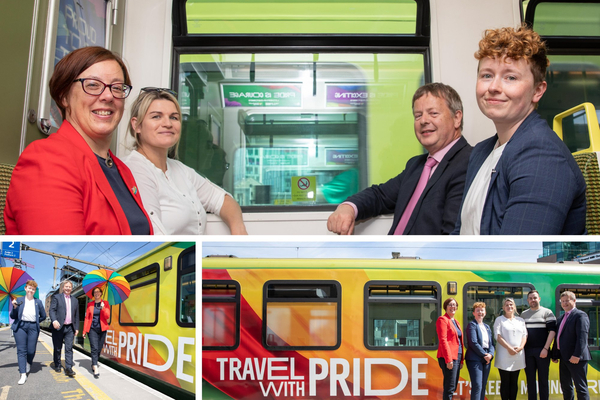 The Transport for Ireland (TFI) network of public transport services is delighted to be sponsors of Dublin Pride 2022.

Over the course of the month, the TFI logo will feature prominently on Dublin Pride related events, and the brand will also be represented in the first Dublin Pride March since 2019.

The carriages, which were revealed at Dublin’s Grand Canal Dock DART station, will track through Dublin and Wicklow’s DART lines over the coming months.

Irish Rail has also teamed up with the LGBTQ+ charity, Shout Out to run workshops within Iarnród Éireann on how to champion the company’s LGBTQ+ community.

As a member of the LGBTI National Inclusion Strategy Committee, the NTA is committed to promoting equality and diversity to all members of society.

As a strong ally of the LGBTQ+ community, the NTA participates in Pride at Work training sessions and visibly demonstrates support, both virtually and in person via our words and actions.

CEO of the NTA, Anne Graham said, “it is tremendously important for the Authority as an employer, to demonstrate solidarity with our LGBTQ+ colleagues. I want to reaffirm our commitment to promoting a culture of equality, diversity and inclusion across the organisation and I look forward to the implementation of a number of EDI actions in 2022 arising from our work in this space over the past year”.

Army on Standby to Help with Dublin Airport Security