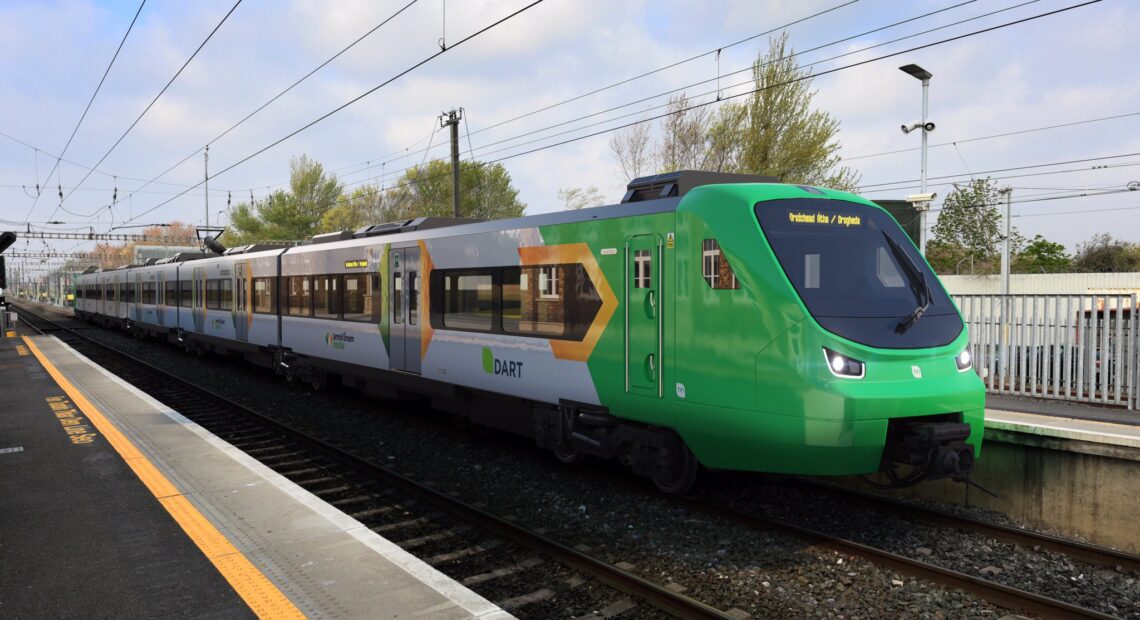 The largest and most sustainable ever order of fleet for Ireland’s public transport network was confirmed as Alstom were awarded a contract by Iarnród Éireann (IÉ) for up to 750 new rail carriages over the coming decade.

Minister for Transport Eamon Ryan T.D., Global CEO/Chairman of Alstom Henri Poupart-Lafarge and Chief Executive of the National Transport Authority Anne Graham, joined Iarnród Éireann’s Chief Executive, Jim Meade, at Iarnród Éireann’s Inchicore Works to formally sign the contract.  An initial order has been placed for 95 electrically-powered carriages – made up of 19 five-carriage train sets – are set for delivery from mid-2024, entering service in 2025, and will include a number of battery powered carriages, which will deliver more capacity for commuters in advance of electrification of the lines upon which they will operate.

Funded under the National Development Plan 2021 to 2030 by the National Transport Authority, the order for the DART+ Fleet is part of the DART+ Programme, an investment which will more than double the commuter capacity and treble the electrification of the Greater Dublin Area rail network.  DART+ will facilitate sustainable mobility and development to enhance quality of life in our capital and its surrounding counties.

IÉ, supported by the NTA, and Alstom have concluded a framework agreement allowing for up to 750 new DART carriages to be ordered over a 10-year period.

Alstom is one of the largest global suppliers of trains, and is well known to Irish transport users as the supplier of the LUAS tram fleet, and globally as the manufacturer of TGV high-speed trains.  Alstom will deliver the new DART+ fleet as an energy efficient suburban transport solution from its proven X’Trapolis family of trains, with over 2,000 of these already in service in more than 10 countries, but with bespoke refinements to meet the needs of DART+ and Ireland’s specific track gauge.

The Irish Government has given approval for €318million (incl. VAT) for the initial order for DART+ Fleet, and this includes substantial one-off design costs.

The ambitious overall agreement for up to 750 carriages allows for the overall planned fleet expansion, ensures there is a framework is in place for more carriages to be ordered as demand increases – including requirements outside the current National Development Plan – and enables replacement of the original DART fleet (76-carriage fleet in service since 1984).

As well as the capacity increases that will be delivered through the DART+ Programme and the new DART+ Fleet in the Greater Dublin Area, Intercity carriages currently in use on Commuter services will be cascaded upon arrival of the new electrically-powered trainsets to enhance and strengthen other rail services.

Speaking at the event, the Minister for Transport, Eamon Ryan T.D said, “the DART is one of the great successes of our transport system, and we are now  moving into an exciting new phase with Dart+, which will double capacity and treble the length of the network. This new fleet will result in  increased capacity for passengers as well as improved accessibility, facilities and comfort. The battery electric trains included in this contract will be used on the Northern Line before electrification of the line is complete.  This will free up the diesel units to be redeployed elsewhere thus boosting capacity further.“

“Expanding and improving public transport is key to reaching our climate goals. We know from experience that if we provide high quality public transport people will use it, and I look forward to seeing the project progress in the years to come.”

Chief Executive of Iarnród Éireann Jim Meade said, “the significance of this order and framework agreement – coupled with the approval by Government last week of the DART+ Business Case – for the future of rail transport in Ireland and our wider sustainable transport network cannot be overstated. This framework agreement with Alstom, and the associated infrastructure investment under DART+, will be central to a transformative change for our services and for our customers, and will help us in Iarnród Éireann to achieve our ambition of being the backbone of Ireland’s sustainable transport network. We’re excited to work with the NTA and Alstom to deliver expanded services in the Greater Dublin Area, enhanced facilities for our customers, and a cleaner environment for our country.”

Chief Executive of NTA – Anne Graham said, “the signing of this contract today is a clear indication of the real progress that is being made in developing a public transport service that will meet and exceed the transport requirements of people in this region for years and decades to come. I have no doubt that the DART+ as a programme of projects will prove to be transformative for the entire region, and work is already proceeding well on progressing the infrastructure schemes.  But communities along these lines shouldn’t be asked to wait any longer than is necessary, and by prioritising the procurement of this fleet, it will be possible to deliver extended DART services, even before the required infrastructure investment is completed.“

“In NTA’s revised Draft GDA Transport Strategy 2022-2042 that we published last month, we announced that PSO bus and commuter rail fleet in the Dublin Metropolitan Area will be 100% electric and zero-emission by 2035. Today’s announcement marks a significant step towards that objective.”

Global CEO/Chairman of Alstom, Henri Poupart-Lafarge said, “Alstom is delighted to have been selected to deliver the new DART+ fleet. Ireland is a very important market to us, and the new electric and battery-electric X’trapolis fleet is a big step for making rail even more sustainable while transforming the passenger experience in the Greater Dublin area and beyond. This order reinforces Alstom’s position as the world’s leading innovator and supplier of green mobility technologies.”

€676m Allocated to Ireland’s National Roads and Greenways for 2022