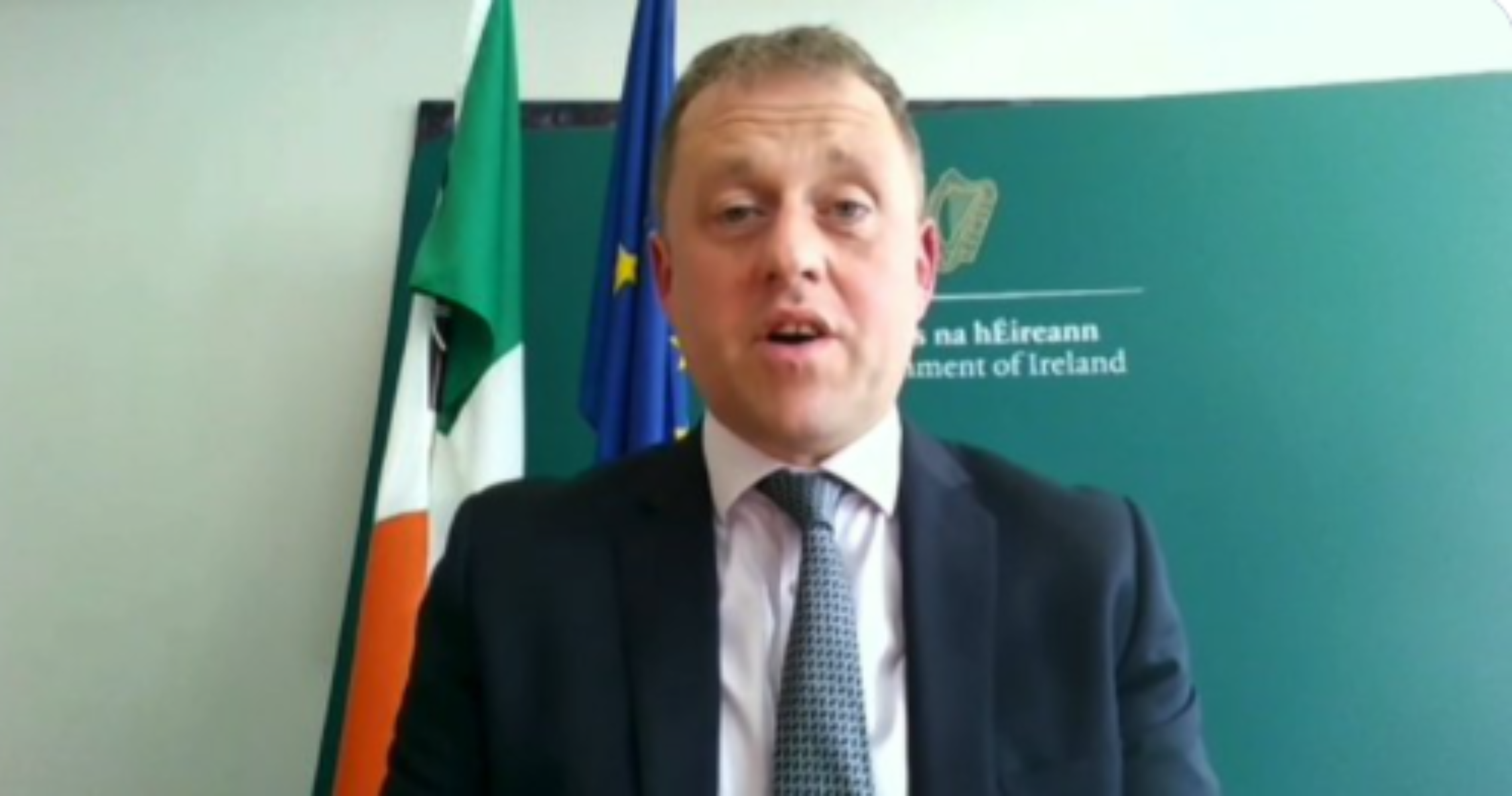 Ireland’s Europe minister, Thomas Byrne, said “there can be no renegotiation of the Ireland UK protocol”. The UK is expected to tell the EU that it will take unilateral action if fresh agreement is not reached. The two sides agreed the Northern Ireland Protocol in 2019, as part of the Brexit withdrawal agreement.

DUP MP Sammy Wilson said the Northern Ireland Protocol is being “used and abused by the EU” to retrieve lost influence in the UK.

Thomas Byrne said the Irish government is “willing to discuss any creative solutions within the confines of the protocol”.

The Protocol prevents a hard border in Ireland by keeping Northern Ireland in the EU single market for goods. The UK says its implementation has been unbalanced and it is unsustainable in its current form.

UK Brexit Minister Lord Frost will lay out the UK’s proposed way forward in a statement to the House of Lords later. On Monday, he said ways needed to be found to hugely reduce or eliminate the new barriers to trade from Great Britain to Northern Ireland which have emerged as a result of the protocol.

Northern Ireland Secretary Brandon Lewis will also make a statement to the House of Commons.

It comes as the chairman of Marks & Spencer called for a common sense solution to post-Brexit problems at its stores on the island of Ireland.

Mr Byrne said the Protocol had its complications, but that the EU and UK had to work within the confines of that agreement, stating, “an SPS agreement (deal with EU on plant and animal health measures) is what we’ve proposed and we strongly urge the British government to consider that – it would solve a lot of problems for people in Northern Ireland and Britain.”

“The EU commission has offered this agreement to the British government so this is something we can really work well with the British government on. There are opportunities for Northern Ireland within the Protocol and there is unprecedented interest in investment in Northern Ireland, including Marks & Spencer, who announced in April they were building a huge new food hall in Coleraine.”

In a social media post, First Minister Paul Givan said he had had a “morning call with Brandon Lewis and Lord Frost discussing the command paper that will be published later today. Evidence is clear the Protocol has failed and is damaging the economy of Northern Ireland, destabilising societal cohesion and lacks democratic accountability.”

Sammy Wilson said that since “95% of goods that come across the Irish Sea from GB into Northern Ireland never go near the Irish Republic, they’re not causing a threat to the EU single market. There are clauses that allow for renegotiation and changes to be made and new arrangements to be put in place so the EU can’t say this is set in stone.”

“If there is acceptance of equivalence of rules, then the rules made in Northern Ireland and GB would be held to be equivalent to EU rules and the problem would go away. Or go down the route that we have mutual recognition of each other’s standards and enforcement of this.”

The real issue for retailers like M&S are Export Health Certificates (EHCs). These are complex official certificates which must accompany every product of animal origin, such as meat and milk, when they enter the EU single market. A ‘grace period’ means supermarkets don’t currently need EHCs for most products going to Northern Ireland, which is still in the single market.

But this is due to change in October and it will hugely complicate the business of shipping food across the Irish Sea. The problem has been well understood for a long time but retailers are increasingly desperate for the UK and EU to agree a solution.

Marks and Spencer chair Archie Norman said the level of checks and controls are very threatening to its Irish business. He suggests the easiest solution would be to “agree a time limited veterinary/food standards agreement. At the moment only about 80% of our product is getting into [the Republic of] Ireland – so 20% doesn’t arrive at all.”

“It’s not the rules of the Customs Union that is the problem, it’s the Byzantine and pointless and honestly pettifogging enforcement which means that wagons can’t get through.”

The protocol was agreed by the UK and EU in October 2019 and was subject to further negotiation and agreement in 2020. It keeps Northern Ireland in the EU single market for goods and means EU customs rules are enforced at its ports.

Food products are subject to the most onerous checks and controls. The EU has suggested a temporary Swiss-style veterinary agreement as a way to reduce checks, which would require the UK to follow all EU agri-food rules.

The UK said it is unwilling to cede control to the EU on this issue and is instead pushing for an equivalence arrangement in which the EU would recognise UK food production standards as being equivalent to its own.

The EU has limited equivalence agreements with New Zealand and Canada. The UK proposal is more far reaching than those other EU equivalence deals. The two sides are supposed to agree any changes to the protocol through a body called the Joint Committee.

However, the UK has already acted unilaterally, extending “grace periods” and introducing other measures without EU approval. That prompted the EU to launch legal proceedings which are ongoing. Article 16 of the protocol also allows either side to unilaterally override parts of the deal if they are causing “serious economic, societal or environmental difficulties that are liable to persist, or to diversion of trade”.

At the peak of a row over AstraZeneca vaccines, the European Commission proposed using Article 16 to prevent vaccines from the EU being exported to Great Britain via Northern Ireland. However, it backed down within hours following furious criticism from the Irish government and politicians in Northern Ireland.