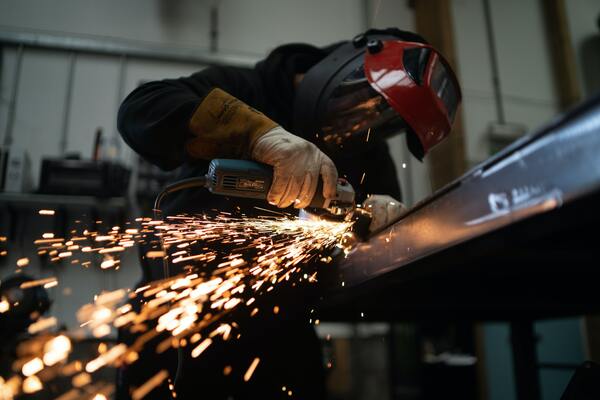 The Irish manufacturing sector suffered its steepest drop in production since February 2021 and saw new orders decline for a third successive month in August, the latest AIB Ireland manufacturing PMI has found.

The PMI registered 51.1, down from 51.8 in July, making August the fifth straight month that the PMI reading has declined, the longest sequence of month-on-month declines since mid-2019, while growth is at its weakest rate since October 2020.

In August 2021, the PMI had registered a fifth straight reading of above 60.0, supported by rapid gains in output, new orders, jobs and input stocks, although lengthy supplier delays were also a contributing factor. A reading of 50.0 would indicate no change.

Oliver Mangan, chief economist at AIB, said, “much weaker readings, though, have been seen in the rest of Europe for August, with the flash Manufacturing PMI moving down to 49.7 in the Eurozone and falling sharply to 46.0 in the UK.”

Although the PMI remained in overall growth territory, it masked further declines in new orders and output, the two largest components of the index.

New orders fell at a slightly weaker rate than in July, with respondents linking weaker demand to a reluctance among customers to spend amid record inflation and economic uncertainty. New export orders also fell more quickly in July.

Output also declined for a third successive month, partly reflecting efforts to clear backlogs and also to limit growth in unsold stock as inventories of finished goods rose for the second month running.

Mangan continued, “the impact of weakening demand on Irish manufacturing activity is clearly evident in the third consecutive monthly contractions in both output and new orders. The drop in new orders resulted in a further easing in capacity pressures, with backlogs of unfinished work declining for a fourth month running. Weakening demand also saw stocks of finished goods rise at the fastest pace in over three years.”

The 12-month outlook for production remained positive, but expectations eased to a 22-month low reflecting firms’ concerns around inflation and recession risks.

Hiring, linked to the US market and efforts to build capacity, continued despite the downturn in demand, albeit as the weakest rate of job creation since January 2021, and pressure on supply chains remained strong, although there was evidence of relative improvement.

Suppliers’ delivery times rose markedly overall, but to the smallest degree since November 2020, partly reflected by weaker demand for inputs, as the volume of purchasing activity was unchanged in August following the first decline for 17 months in July.

Delayed inputs continued to arrive at Irish manufacturers, with stocks of purchases across the sector rising at one of the fastest rates on record, and inflationary pressures also remain higher, although reduced pressure on supply chains helped to slow the rate of input price inflation.

Mangan concluded, “while inflationary pressures remain strong, there are signs that they are beginning to slacken. Input costs continued to rise sharply, but at the slowest pace in a year. This helped output price inflation ease to a seven-month low, though it still remains elevated.”