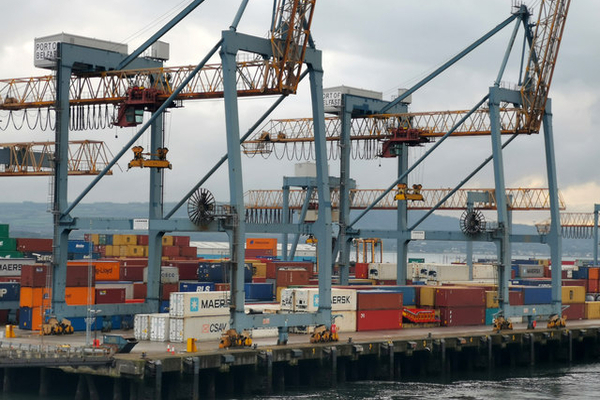 RoRo traffic in the first quarter of 2022 grew by 18% when compared to Q1 2021. This rise was expected, as a significant pre-Brexit stockpile, coupled with COVID-19 lockdown measures, suppressed traffic volumes in Q1 2021. When compared to Q1 2020, traffic is 4% higher in 2022. At 296,000 RoRo units, this is a robust performance for the sector that is in line with 2019 volumes, a year which recorded the highest annual total on record.

The increase this quarter was driven by traffic on ROI – GB routes, which rose by 22%. It was on GB routes where the pre-Brexit stockpiling effect in early 2021 was most concentrated. GB traffic through Dublin Port rose by 24% year-on-year, while GB traffic through Rosslare Europort rose by 4%. However, ROI – GB traffic remains approximately 20% below pre-Brexit levels, with no imminent sign of a rapid return to such levels.

ROI – EU RoRo traffic has held on to the remarkable gains made throughout 2021. ROI – EU traffic rose by 10% when compared to Q1 2021. Again, this was expected given the unusually low volumes recorded in early 2021. There were significant COVID-19 economic restrictions in place during that period. As with previous waves of economic restrictions in 2020, a decline in maritime traffic followed.

Elsewhere in the Irish RoRo market, it should be noted also that RoRo traffic at the Port of Cork is performing strongly, with the addition of two new services in 2021 now showing up in traffic handled. Overall, both ROI – GB and ROI – EU traffic have recorded volumes that are in line with those handled throughout 2021. As a result, the post-Brexit makeup of Irish RoRo traffic remains unaltered.

In Northern Ireland, RoRo traffic in Q1 2022 is in line with Q1 2021, recorded 0% growth. However, this is roughly 6% below the average quarterly volume recorded in Northern Irish ports throughout 2021, wherein record volumes were handled. The disruption caused by P&O ferries restructuring in March 2022 led to the loss of traffic at the port of Larne, and this explains much of this decline.

As highlighted in the latest volume of the Irish Maritime Transport Economist, LoLo traffic through Irish ports have also benefitted from post-Brexit demand for direct services to mainland Europe. Record volumes of LoLo TEUs were handled in 2021. In Q1 2022, LoLo traffic through ROI ports is 1% higher than the same period in 2021.

This loss of momentum in LoLo traffic is reflective of the increasing cost of container freight rates, which have risen sharply since mid-2021. Charter rates for feeder containership vessels rose by a factor of six between Q1 2019 and Q1 2022. Such dramatic increases in freight rates were caused by a combination of port congestion at major hubs, disruption to the supply lines of new vessels, and changes in global consumption patterns since the beginning of the COVID-19 pandemic.

When compared to Q1 2021, a period of significant travel restrictions, maritime passenger traffic in Q1 2022 rose by more than 200%. 210,000 passengers transited through Dublin, Cork and Rosslare on ferry services, almost 150,000 more than the same period in 2021. However, this remains 31%, or roughly 95,000 passengers, fewer than Q1 2019. The return to pre-pandemic passenger volumes has therefore yet to be reached.