I had access to an unprecedented level of resources to spend on transport infrastructure; and worked with reforming Ministers who were willing and able to get Government approval for significant structural and policy change in the way in which we regulated and delivered transport services. In that context, I want to give a special mention to my first Minister, the late Seamus Brennan.

By the end of my seven year term we were reeling, like everyone else, from the dramatic collapse of the global and Irish economy, and moving fast to seek radical cuts in expenditure and staff numbers and find leaner more efficient ways of doing things.

That meant letting go of some of our more ambitious dreams for further substantial spend on infrastructure and looking for other ways of achieving our transport policy goals. I have great respect for those who followed in my footsteps. They have had to work within those constraints in recent years. Their task is far more challenging than mine was.

Reflections on what I’ve learnt in the last 5 years. Rather than go over old ground from my time in Transport, I’m going to share seven things I have learnt since I left the civil service from working with very different individuals, businesses and organisations in the private, public and not for profit sectors.

The first is:
Sustainability matters.

One of the things I helped start but hadn’t finished was to put a focus on sustainable transport. That was partly driven at the time by the Green Party in Government and also by my Minister – Noel Dempsey – who, as a former Minister for Energy and the Environment, passionately believed in the importance of reversing unsustainable transport and travel patterns.

In the intervening years I’ve come to appreciate that a focus on sustainability needs to be at the heart of everything we do. Former President Mary Robinson once said she only fully realised the true importance of sustainability on the birth of her first grandchild and I had a similar reaction when mine arrived in Beijing last year. Suddenly the kind of world he will grow up in became far more important to me. A good friend of mine, Pat Whelan, who is a very successful and innovative fourth generation butcher, said to me once “I didn’t inherit the business from my father, I borrowed it from my children.” For me that sums up the simplest definition of sustainability – meeting the needs of the present without compromising the ability of future generations to meet their own needs.

You don’t have to be motivated by concern for the future of the planet to believe in sustainability. It makes plain business sense. Bord Bia’s Origin Green initiative is an example. Through it we are becoming one of the most sustainable producers of food and drink anywhere. And why? Because it matters, not just for a world which will have to produce 70% more food by 2050 from increasingly limited resources, but to the retailers, foodservice operators and food manufacturers who are looking for details of the sustainability impact associated with their products. If you look at the transport sector here in Ireland, road transport represents 40% of Ireland’s Final Energy Consumption. Excluding aviation and marine, transport also accounts for 21% of our greenhouse gas emissions.

Irish transport energy demand has dropped by 27% since 2007. The main reasons for this are a 43% reduction in energy used for freight transport over that time associated with a 50% drop in laden freight activity. This is against the backdrop of fuel price per litre doubling over the past 10 years. Since1995, transport energy efficiency has improved by 22%. But residential energy efficiency has improved by 36%, driven by proactive policies and supports. We can expect trends in transport energy consumption to reverse as the economy picks up and this will lead to an increased focus on the associated costs. Renewables are beginning to become evident in transport with biofuels now accounting for 3.8% of fuel supply at the pump. There’s a wide range of legislation, including the Energy Efficiency Directive and the Clean Vehicles Directive, as well as standards and growing client requirements all increasing the push towards more sustainable transport.

We know from the mentoring and other supports that SEAI is providing to businesses that a focus on energy management can yield savings of 5 to 15% with ECO-driving alone showing savings per vehicle ranging from 5 to 35%. In the transport and logistics sector, a structured approach to tracking Energy Performance Indicators and effective route planning is essential to achieve these kinds of results. This can range from simple spread sheets to complex route management systems.

My second point is:

Be rigorous about controlling costs.

In the tiger years some of us lost sight of this. We ended up with services we couldn’t afford to maintain and cost bases that were unsustainable. But the best performing companies have always recognised that if your costs are tightly controlled and you conserve cash you will have the resilience to deal with the glitches and even shocks on the revenue side and re-group fast.

In the last year, Ryanair achieved €70m in savings on their fuel bill by flying slightly slower and burning less fuel. This saving is substantiated from sophisticated telemetry used to determine the operational performance of the engine. The analysis shows that slowing down and maintaining a steady pace while cruising can achieve considerable fuel savings – the aviation equivalent of ECO-driving. The average fuel burn per hour by the Ryanair fleet has been reduced by 6% since 2011 through this approach. As well as saving money this leads to a safer, more pleasant and relaxed flying experience for passengers.

Some measures for achieving on-going cost savings in transport require investment in new technologies or buying the most energy efficient vehicles. Celtic Linen in Wexford has just launched their new Eco- Hybrid vehicle following the successful integration of an electric vehicle into the fleet. But not all require a complete retrofit of the existing fleet. New energy efficient tyres alone have been shown to achieve savings of 7 to 8%.

Which brings me to my third point:

Without the luxury of significant resources for investment both the public and private sectors have to focus on getting the most out of existing resources – on using what we have better. Dublin Bus and Bus Eireann are also going after the low-hanging fruit in the area of energy management with little upfront cost – adapting driver behaviour, minimising engine torc, using stop start technologies, route maximisation etc – typically savings of 20% are being achieved from efficient fuel management. Softer measures are also being used to encourage take-up of public transport – Leap card, RTPI and wifi for instance.

Bearing in mind that 60% of transport emissions are from the private car fleet, the Department of Transport has also supported community led initiatives for “active travel towns” to get people out of their cars with encouraging results. Let me give you a few specific examples from the transport and logistics industry:

Eleven member companies of the Coach Tourism and Transport Council took part in an SEAI programme. Each was trained in energy management, received an energy assessment and had two drivers trained in ECO-driving. Between them they had a combined energy spend of e6 million, emitted 15,800 tonnes of CO2 and diesel represented 95% of their energy costs. The companies all reported savings ranging from 5% to 21% of their energy costs. A sustained average saving of between 5% and 10% per driver was made from ECO-driving alone.

Coillte developed a similar programme with SEAI grant support aimed at assisting their road hauliers to become more efficient. It included energy management training, assessments, ECO-drive training and the introduction of fleet management technology. The result was a saving of 1 million litres of diesel last year.

One experienced driver, Mick Dunne, went from a cynical “what can this guy teach me” to being “110% sold”. As well as being amazed by the fuel and tax savings, he noted how relaxed he felt. His fuel consumption dropped from 35 litres/100 km to 29 (a saving of 15%) and the time taken for his journey from 55 minutes to 45 minutes (a saving of 18%).

These examples demonstrate that energy management is the engine for finding and sustaining significant cost savings in transport with driver participation and systems to track performance being vital to success. There is no point in having good energy performance indicators unless they are stringently enforced. For instance insisting on adequate tyre pressures can save 2 to 3% of your fuel bill.

My next point is:

Be crystal clear on your USP.

Whether you’re an airline, a bank, a transport or a logistics company, decide what you stand for, what’s unique or special about your business, and stick to it. While Ryanair may change its approach to attracting and retaining passengers, it will not lose its focus on being ultra-low cost because that’s what gives it its competitive edge. Permanent TSB has coined the phrase “back to basics banking” reflecting its intent to return to the core values of high street banking.

Don’t be afraid to change the way you get there.

During my time in the Department of Transport, Willie Walsh said of Aer Lingus “change or die”. He was right. It was Sheryl Sandberg of Facebook who said that the ability to learn is a leader’s most important quality.

You can only sweat the assets so much and put off re-investment for so long before you have to rethink your approach. There’s no point in doing the same thing more efficiently if it isn’t working in the first place. Sometimes more radical decisions are needed and cuts in services have to be faced. When the need for change is identified, the most successful organisations implement their decisions speedily and with enthusiasm.

At the same time future proof against risk.

It’s self-evident that we didn’t do this as a country. Most of the businesses I now work with are operating in complex and constantly changing business environments and facing ever more complex risks. If I’ve learnt anything in recent years it is that effective risk management requires more than having an operational risk management system in place. It’s about every individual in the organisation being focussed on protecting and championing company reputation and creating a resilient organisation. It’s about building the capability to deal with expected and unexpected crises. As a recent briefing paper by Cranfield School of Management1 put it, the most resilient companies are “bristling with risk awareness”. They have exceptional risk radar, build strong relationships internally and externally which will support them when the going gets rough and have leaders that are both respected and respectful.

As in the way we do things around here, the way we bring our people with us whether by sheer force of personality, by setting tone from the top or by celebrating successes, the way we govern our organisations and challenge the status quo. Diversity, in the broadest sense, is a critical part of creating a successful culture. That’s true of companies and it’s true of countries. We are slowly beginning to emerge from one of the most difficult periods in our nation’s history. As we dust ourselves off, I sense we are revisiting the core values that once made Ireland a great force in the world and will do so again. The short video produced by Fáilte Ireland for St. Patrick’s Day – “Ireland Inspires” made us all feel just a little bit proud of coming through this dark phase. We are on our way again, but this time, I hope, in a sustainable way.

I will end with a call to action

Sometimes in life we wait for the big shift to come along – the radical new technology, the big investment. But it can be the sum of the small bonfires that creates the blaze of change. If tomorrow morning, each one of us in this room were to consider one small change we could make to improve the sustainability of our own business and resolve to implement it, what might we all achieve together? 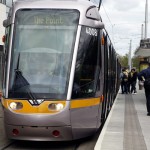