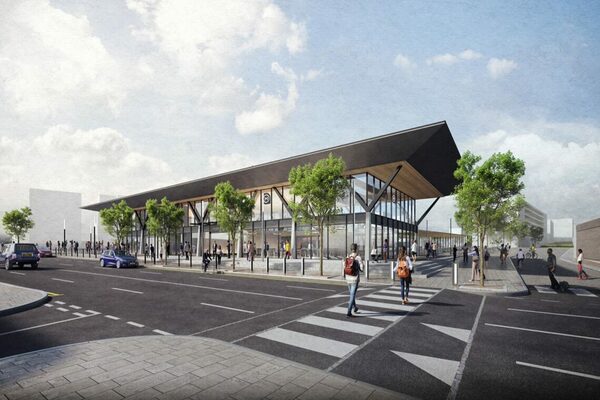 The Minister for Transport Eamon Ryan has secured agreement from Cabinet to move forward with the transformative MetroLink rail project.

Minister for Transport Eamon Ryan brought the MetroLink Preliminary Business Case to Cabinet yesterday. Planning submission on the public transport ‘megaproject’, which will transform public transport in Dublin and improve interconnectivity with national rail links, will be lodged this September. It is anticipated that MetroLink could be in operation in the early 2030s.

MetroLink is a transformative piece of new public transport infrastructure, the first of its kind in Ireland. It will consist of a fully segregated railway, most of which will be underground, running from north of Swords to Charlemont in the south of Dublin City Centre. The route will include 16 stations and serve multiple residential communities such as Swords, Ballymun and Glasnevin, as well as the City Centre, Dublin Airport, and major employment, education, transport and other centres.

When operations commence, there will be trains every 3 minutes during peak periods. This can rise to a service every 90 seconds by 2060 with the system capable of carrying up to 20,000 passengers per hour in each direction. For comparison, Luas Green Line can carry circa 9,000 passengers per direction per hour.

A metro for Dublin has been in development in various forms for more than 2 decades. Ireland remains one of only a small number of countries in Europe without a metro in its biggest city or a rail connection to its main international airport. The National Development Plan (NDP) 2021-2030 specifically lists MetroLink as one of its strategic investment priorities and it is fully aligned with the Climate Action Plan 2021 and other major strategic plans.

Announcing the decision, Minister Ryan said, “MetroLink is a once in a generation project that is going to massively transform the public transport system in our capital city. This project in various guises has been on the table now for 2 decades, but the government’s decision on the MetroLink Preliminary Business Case marks a significant milestone. Now this exciting transport megaproject starts to become a reality. We are giving the green light to a transport system that will be integral to the city and the country’s sustainable development in this century, and into the next.”

“MetroLink is hardwired to our climate ambitions. It will provide over 1 billion carbon neutral, fully electrified, passenger trips by 2050. Over 175,000 people and 250,000 jobs will be accessible to the stations by foot alone. By interchanging with other public transport systems such as DART and Luas, MetroLink connects to more than a million people in the Dublin area, and more across Ireland. The project will improve the quality of the urban environment and people’s lives, as well as enable the development of more well-connected homes in and around our capital city. It will contribute to a shift from the private car to more sustainable travel, helping to decarbonise the transport sector in line with government policy. I’m delighted that the government has agreed with my recommendation to proceed with the project, and I look forward to it entering the statutory planning stage this September.”

Commenting on the decision, Minister McGrath said, “there is widespread agreement as to the importance of progressing the MetroLink project as a means of connecting communities, businesses, transport hubs and education settings across Dublin. Our task now is to ensure that the scheme progresses in a timely manner with protecting the interests of the taxpayer as a central tenet of the project. My department has developed a suite of oversight measures including the External Assurance Process to allow for independent scrutiny of public projects at key decision-making stages and the Major Projects Advisory Group which provides further scrutiny of external reviews. These processes will be essential to the efficient delivery of this vital piece of national infrastructure.”

Chief Executive of the NTA, Anne Graham, commented, “this is an important day for Irish public transport. MetroLink is about providing a frequent, reliable, sustainable alternative as part of an integrated system, so that we can encourage more people to get out of their cars and on to public transport.”

Chief Executive of TII, Peter Walsh, said, “MetroLink will provide an efficient service, with an end-to-end journey time of only 25 minutes, as part of an integrated public transport system. We look forward to bringing this project to An Bord Pleanála in September.”

After reviewing the options and figures, the Department of Transport recommended approval of the MetroLink project as proposed by TII and the NTA. While it is too early to give a precise project cost as it has yet to go through the planning and procurement stages, a central scenario provides an indicative capital delivery cost of €9.5 billion. This is the midpoint scenario of a credible, but still indicative, capital delivery cost range between €7.16 billion and €12.25 billion. Approximately three-quarters of the cost during the construction phase will be paid for by the exchequer and one quarter financed by a Public Private Partnership (PPP). A more exact cost will be known following planning permission and procurement process.

The analysis clearly shows that MetroLink will deliver benefits to the Irish economy and society to the tune of €13.7 billion over 60 years, well in excess of expected project costs.

Following this decision, TII will submit a planning application for the MetroLink route to An Bord Pleanála in September, with the procurement process commencing next year. Dependent on the outcome of the planning and procurement processes, construction of MetroLink is earmarked to commence in 2025 with a view to operation in the early 2030s.

What Are Renewable Fuels?