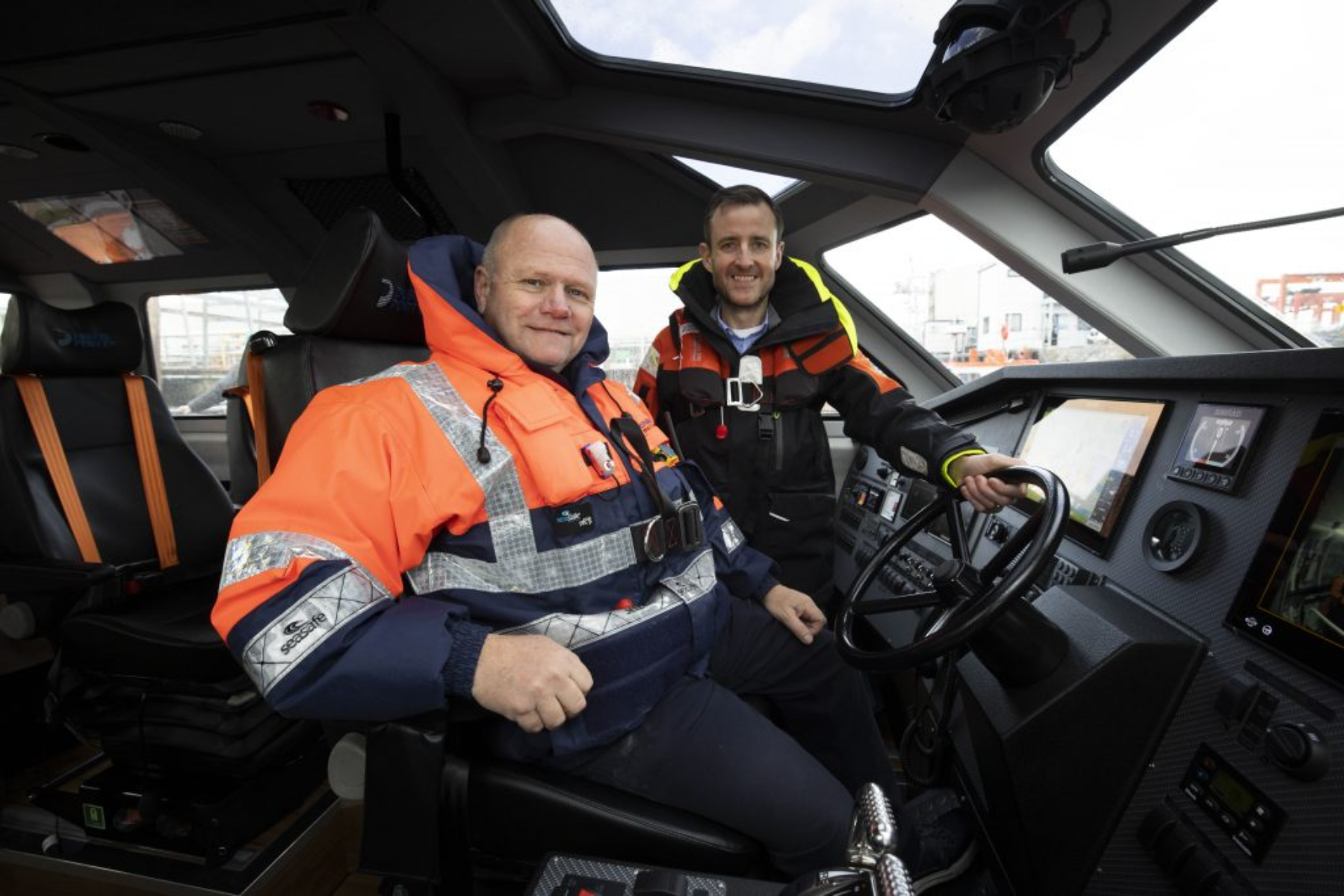 Piloting the new vessel on her maiden voyage to Dublin was Alan Goodchild of the leading UK boat builder Goodchild Marine Services Limited, the Norfolk-based company that built DPC Dodder having secured the contract to construct the boat in 2020. This is the second pilot boat that Goodchild Marine has supplied to the Port in recent years, having delivered the DPC Tolka in 2019.

Taking delivery of the 17.1 metre ORC vessel in Dublin Port was Harbour Master Captain Michael McKenna and Assistant Harbour Master Paul Hogan. The latest addition to the Port’s fleet is the second incarnation of the DPC Dodder, as the original was retired in 2020 following 23 years of service. The new Dodder joins pilot boats Liffey, Camac, and Tolka amongst the Port’s fleet of working vessels, which also includes tugboats Shackleton and Beaufort and multi-purpose workboat the Rosbeg.

Designed by French Naval Architect Pantocarene for both fuel efficiency and performance in challenging weather conditions, DPC Dodder features the latest navigational and safety equipment on board, including a dedicated Pilot workstation in the wheelhouse and hydraulic Man Overboard Recovery Platform at the stern.

With shipping companies increasingly deploying longer, deeper ships capable of carrying more cargo, DPC Dodder represents a vital upgrade and expansion in the provision of pilotage services at the Port and will allow Dublin Port’s team of highly skilled marine pilots to reach and board these ships in all weather conditions from a greater distance out into Dublin Bay.

Dublin Port Harbour Master, Captain Michael McKenna, said, “Dublin Port Company is delighted to take delivery of DPC Dodder, another state-of-the-art vessel from Goodchild Marine. Demand for pilotage continues to grow as the Port does, and DPC Dodder will help meet the operational and navigational needs of both regular customers and visiting vessels in the years ahead. We were delighted to work with Goodchild Marine again and thank them for their skills and workmanship in designing and delivering this vessel.”

Eamonn O’Reilly, Chief Executive, Dublin Port Company, said, “at Dublin Port we are always investing in infrastructure, but that is not simply confined to marine engineering works such as building quay walls, but also extends to the fleet that keeps the Port operational around the clock. Our pilots increasingly need to embark and disembark from much larger capacity ships, often in poor weather conditions or at peak times when demands for pilotage services are highest. DPC Dodder has allowed us to upgrade our equipment in line with customer investment in new ships and additional capacity on existing routes.”

Stephen Pierce, General manager, Goodchild Marine, said, “our flagship ORC range of pilot boats are certainly making waves within the industry and we are delighted to be able to export our second ORC 171 to the Dublin Port Company.”

“The pilot operation across the UK and Europe now demands bigger and stronger boats that can withstand the most challenging conditions. We believe we have responded to market demand by producing such a vessel.”