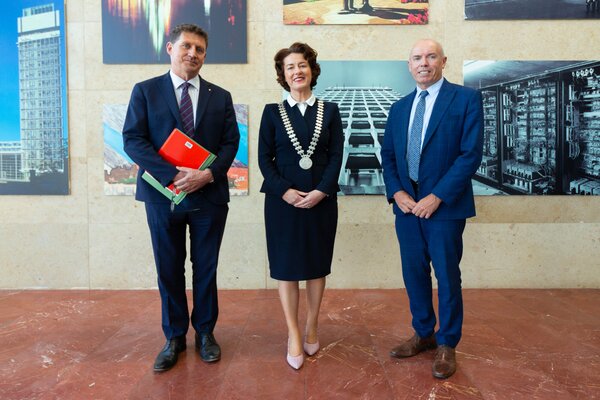 The National Transport Authority (NTA) has unveiled a €600m investment in BusConnects Cork which will include the creation of new Sustainable Transport Corridors (STC) to help meet the needs of a growing city while accelerating the journey to a net-zero future.

The proposals, if implemented, will feature:

The Sustainable Transport Corridors initiative is one of the nine key elements of BusConnects Cork that will transform the city’s bus system, making public transport more accessible to more people. These include redesigning the network of bus routes in the city, transitioning to a zero-emissions bus fleet, rolling out a new bus livery and implementing a new modern ticketing system.

The proposed sustainable transport corridors are fundamental to realising the ambition of the Cork Metropolitan Area Transport Strategy, developed in connection with Cork City Council and Cork County Council, to increase the number of people using public transport in Cork fourfold by 2040 and expand the numbers cycling and walking by 33%.

The 12 proposed corridors in the STC system are:

A more detailed set of proposals will be published for an initial public consultation during June. This will included extensive public engagement and allow people to provide their feedback, insights and local knowledge regarding the proposals. A series of Community Forums will be established to fully engage people and groups at a local level for each corridor and surrounding areas, as plans for the project are developed, designed and progressed. Further details regarding the Community Forums will be announced in June.

Minister for Transport Eamon Ryan TD said, “as one of Europe’s fastest growing cities, Cork has a unique opportunity to become a leader in sustainable transport. BusConnects Cork is key to making public transport and active travel a viable option for people and communities across the city.”

“The new sustainable transport corridors announced today, along with the planned roll-out of a zero-emission bus fleet, will make travel by bus, as well as walking and cycling, more attractive to many more individuals and families. By drastically reducing bus journey times and providing dedicated cycling and walking infrastructure, sustainable transport will be at the very heart of a thriving Cork City into the future.”

Anne Graham, CEO of the NTA said, “a clean, modern and reliable public transport system can help unlock Cork’s potential as a connected and competitive European city. That’s why the NTA has unveiled a €600m investment in BusConnects Cork to transform public transport in the city.”

“Central to that investment is the development of the sustainable transport corridor project featuring 75kms of bus lanes and 54kms of cycling and walking infrastructure. With a 51% increase in the numbers taking the bus in just six years, there is a rapidly growing demand for bus services and the need for modern infrastructure to support Cork’s growth.”

“The planned growth in bus services and increase in active travel investment will benefit a significant proportion of Cork’s population but will not fully succeed without the roll-out of the sustainable transport corridors. This report is the first step in creating a more sustainable future for Cork. In June, we will be engaging with commuters, residents and businesses to hear their views about the proposals we have put forward. These views will help the NTA in collaboration with Cork City Council in developing and finalising the Sustainable Transport Corridors.”

Ann Doherty, Chief Executive of Cork City Council said, “this investment by the NTA in BusConnects Cork is a vote of confidence in our city and our ambitious plans to make Cork a better and more sustainable place to live, work, visit and invest in.”

“The provision of 75kms of bus lanes and 54kms in cycling and walking infrastructure will help to meet the increase in demand for travel within the city while reducing the dependency on the car. The project brings with it exciting new opportunities to change the way we travel and to invest in urban renewal. Cork City Council is looking forward to working with the NTA to bring the Sustainable Transport Corridors project to life.”