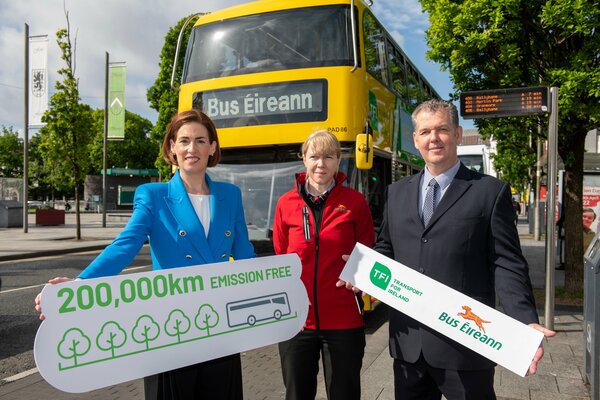 Galway West TD and Minister of State at the Department of Transport Hildegarde Naughton marked the first year since the introduction of hybrid double-decker buses to Bus Éireann’s Galway fleet. The new buses were purchased by the National Transport Authority and by this week will have delivered 200,000 kilometres of emission-free public transport in the city, saving almost 230 tonnes of carbon tailpipe emissions.

The first hybrid bus in the new green and yellow Transport for Ireland livery arrived in Galway in May 2021, with the full city fleet swapped over to hybrid by September, 40 vehicles in total. The new buses have been very well-received by customers and drivers and offer benefits including quieter operation and cleaner air to everyone in the city.

Galway based Minister at the Department of Transport, Hildegarde Naughton said, “Government is committed to leading by example in decarbonising the transport sector and the purchase of hybrid buses for Galway’s fleet is testament to this.”

“Providing reliable bus services by way of environmentally-friendly buses is key to encouraging more people to use public transport for work, education, leisure and other purposes. The fleet is also helping to improve air quality in the city, which has obvious health benefits. I am delighted that Galway has proven the benefits of this technology, and I look forward to the continued roll-out of clean, green transport systems in all parts of the country as part of our Programme for Government commitment to address climate change.”

The National Transport Authority has committed that no new diesel-only buses will be put into operation in Ireland’s urban areas. Bus Éireann’s target is to halve its greenhouse gas emissions by 2030 while increasing passenger numbers. Given Bus Éireann’s extensive and varied public transport network this will require a range of solutions. In addition to hybrid technology, last year Bus Éireann introduced three hydrogen-fuelled zero emission buses for Dublin commuter routes. As the hybrid buses were phased in to the Galway city service, 200,000km does not reflect a full year of operation – even so, it equates to travelling five times round the circumference of the earth and has saved around 230 tonnes of carbon emissions into Galway air over the past 12 months.

The hybrid fleet in Galway has proven extremely reliable and has greatly enhanced Bus Éireann’s preparations for zero and low emission vehicles. Bus Éireann’s Galway craftworkers were the first in Ireland to achieve qualification for this kind of public service vehicle from the Institute of the Motor Industry.

Brian Connolly, Senior Operations Manager West, Bus Éireann, said, “because the buses have an electric drivetrain to connect the transmission to the axles, we have gained valuable in-service experience out on the road and in the garage. This is proving very helpful as we plan with the NTA for Athlone’s town service to switch over to a fully-electric zero emissions fleet. Having Galway city as an entirely hybrid operation has been really positive for Bus Éireann, our customers and for the city as a whole.”

The batteries in Galway’s hybrid double-deckers are charged by the engine when the bus is being driven, while the electric motors are turning the wheels. When the charge is high enough, the diesel engine shuts down for a period of time, allowing the bus to run purely on electric power – the zero emission phase. Once the battery charge goes down, the engine will come back in. The zero emissions distance the bus operates on each trip varies depending on factors such as traffic congestion, weather and topography.

Prior to Covid-19, Bus Éireann carried more than five million passenger journeys in Galway annually. Bus Éireann’s economic benefit to the city has been valued by KPMG at €17m and the company employs almost 260 people in Galway.