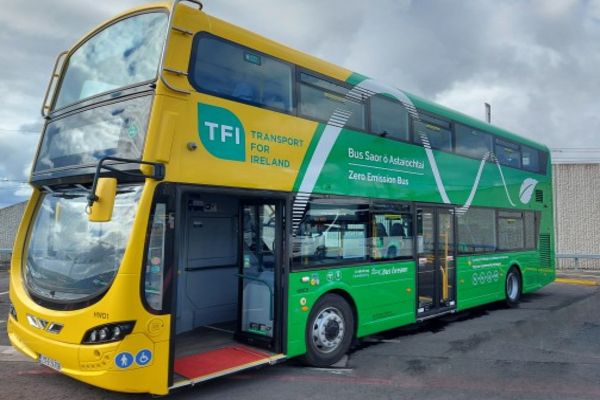 Bus Éireann and the National Transport Authority (NTA) are marking the one-year anniversary of the introduction of Ireland’s first hydrogen fuel-cell electric double-deck buses, which have so far delivered over 60,000 kilometres emission free, the equivalent of travelling between Dublin and Sydney three-and-a-half times.

Three of the new, zero-emission buses entered service on Bus Éireann Route 105x between Dublin and Ratoath, County Meath in July last year. The buses were purchased by the National Transport Authority and have already resulted in a reduction of 20,000 litres of diesel used and a saving of over 50 tonnes of CO2 from tailpipe emissions, a significant reduction in transport emissions across the country.

The hydrogen buses operate in a similar way to battery-electric buses, with the onboard fuel-cell and hydrogen storage tanks generating electricity, which propels the vehicle, allowing it to operate over longer distances than traditional EVs. The only emission from these buses is water vapour, expelled at the rear of the bus.

In addition to the environmental benefits, Ireland’s first hydrogen buses have been well received by Bus Éireann customers in the Greater Dublin Area. The buses can each accommodate 79 customers, are fully accessible for those with mobility issues and are significantly quieter than diesel models because they lack a traditional combustion engine.

Christmas Coach Travel to Ireland Returns for First Time Since 2019