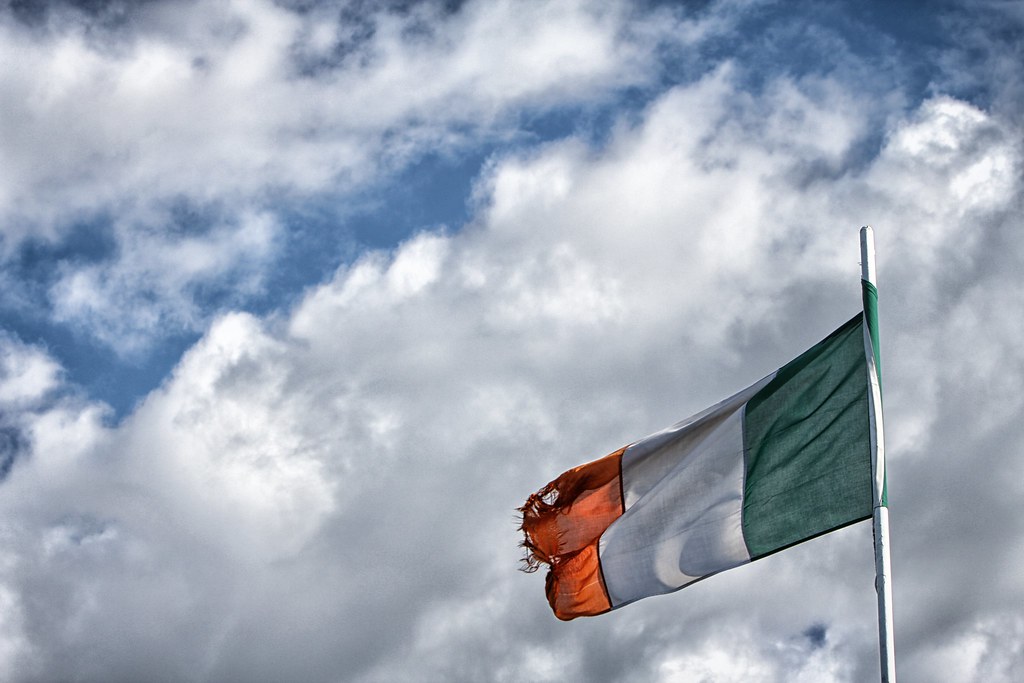 The views expressed are not necessarily those of Linkline Journal but rather that of Ian Hall. This article first appeared on http://disruptionbanking.com on the 25/05/21

As day turned into night on 23 June 2016, Dublin’s politicos headed to McGrattans pub to watch the results of the UK’s referendum on European Union membership broadcast across the Irish Sea.

The gathering, held at the well-known watering-hole a stone’s throw from government buildings, was convened by the European Movement and attracted an international, naturally pro-European crowd. But the mood turned as dark as the local brew of choice as it became clear that the Leave campaign was on course to win.

Among those present was Britain’s (then) ambassador to Ireland, Sir Dominick Chilcott, and Rob O’Reilly, who worked on economic and business policy at the British Embassy. “Dominick went back to the Embassy after the early results came in,” O’Reilly recalls of that fateful evening. “He sent an email at around 1am for a senior staff meeting at 7.30am – normally the meeting is at 9.30am. Some of us stayed ‘till about 2am and hoped everything would be right [a Remain win] by the morning”.

But as dawn broke, the McGrattans drinkers’ fears had been confirmed. “When it became clear that Leave had won, and that David Cameron was going to resign, one thing to do was to inform the banking system and the largest Irish companies that invest in the UK that the collapse of sterling was only temporary,” O’Reilly recalls. “I had a list of Irish banks in front of me for the Embassy to call and say it was all under control and [Brexit] wouldn’t be taking effect immediately.”

The referendum outcome rocked Ireland, more so than any other EU member state, with the (ongoing) fallout significantly more profound (and sensitive).

But fast-forward almost five years and – ostensibly – the financial services story so far looks good for Dublin: better indeed than it does for other EU locations to which London-based jobs and capital have relocated.

Dublin has ‘emerged as the clear winner’ in terms of attracting financial services businesses from the UK, according to New Financial’s data-laden ‘Brexit & The City: The Impact So Far’ analysis. Attractions include its common language, single supervisory structure and expertise, close ties with the UK financial sector, the ‘liveability’ of Dublin itself, and its role as an established financial centre, particularly for investment funds and services, the report notes.

More than 440 firms in banking and finance in total have moved or are moving part of their business, staff, assets or legal entities from the UK to the EU, with 135 firms having chosen Dublin, according to the London-based think-tank’s tally (Paris is on 102, Luxembourg 93, Frankfurt 62 and Amsterdam 48 – all numbers, it says, underestimate the real picture and potential longer-term impact).

Asset management is Ireland’s strongest sub-sector (the same as for Luxembourg). In banking, among the big names bulking up have been Barclays – which picked Dublin as its new EU hub – and Bank of America.

Brian Hayes, the former MEP who left politics to become chief executive of Banking & Payments Federation Ireland (BPFI) a couple of years ago, says the lobby group has witnessed a “significant increase in the depth and breadth of the international banking landscape”. The BPFI continues to see “new opportunities emerging on a regular basis, with firms looking to either grow or place new business lines in Ireland, for example in capital market activity, digitalisation and innovation hubs, or climate risk expertise,” he says.

In respect of banking specifically, Hayes – also a former junior finance minister – describes Ireland as “doing extremely well in terms of winning new business, which will only add to its attractiveness going forward”. He refers to a newly published report by Deloitte and IHS Markit, ‘European capital markets: the regulatory considerations for banks as they move beyond Brexit’, that cites European Central Bank data showing Ireland as second to Germany in terms of being assigned as banks’ ‘EU location hub’ (Ireland also ranked second by other metrics). “Combined with Ireland’s other strengths in financial services, such as in funds and insurance, having this growth in scale and presence will make Ireland a key financial hub within the EU,” Hayes says.

New Financial’s report’s authors go on to say that they expect Frankfurt to be the ‘winner’ in terms of assets and Paris in terms of jobs ‘in the longer-term’.

The number of financial services jobs created or moved to Ireland as a result of Brexit is so far about 3,000, according to inward investment agency IDA Ireland’s figures (from 70 ‘fresh investments’ – the agency’s numbers reflect only those investments that it has advised).

Covid-19’s ongoing impact on where people physically work continues to complicate both the reality and visibility of staff relocations, however. “You do hear stories of people moving over from London but you don’t really see it – it seems to me like a lot [of new jobs] are Irish people coming home,” says O’Reilly, now working as a lobbyist/lawyer for Vulcan Consulting, a company founded by Ireland’s former minister of European affairs, Lucinda Creighton (and which has various financial services firms as clients).

“Fund management is booming here on the back of Brexit. In terms of banks setting up, it’s harder to see, beside Barclays, but Covid may be a big part of that,” he says. On the topic of visibility, there have also been concerns (hardly unique to Ireland) about ‘brass-plates’ – companies opening an office to fulfil regulatory demands but that office comprising little of substance beyond a logoed plaque. “There was concern that this could become a problem,” O’Reilly says. “The narrative and understanding, at least before Covid, was that a lot of these small offices would grow over time. But it’s difficult to tell how many are doing so because of Covid’s impact.”

Analysis of Ireland’s Brexit-related financial services journey, however, should be a broader geographic tour than just a whistle-stop circuit of Dublin’s International Financial Services Centre (IFSC) and ‘Silicon Docks’ tech hub (the equivalent of London’s Canary Wharf and ‘Silicon Roundabout’). At least one third of Ireland’s financial services jobs are located outside the capital, for example in Cork, according to estimates.

Paul Sweetman, director of Financial Services Ireland, which has 155 member companies and representatives on its board from global banks such as Citi, Credit Suisse and Deutsche Bank, foresees the accumulation of a “critical mass of financial services talent” across Ireland similar to its experience in the tech sector that will help spur further growth.

“Although many of the roles coming about as a direct result of Brexit have been Dublin based, there is undoubtedly a spillover effect in regional employment,” says Hayes. The remote-working trend will, he says, make regional locations more attractive. “Shifts in work practices will invariably result in a far greater impact on regional financial services hubs than Brexit in the future,” he says.

“A big fear among Irish banks is that bigger banks take all their internationally experienced staff – I can see that happening in the next 12-24 months,” says O’Reilly.

The sands on which more established local and global players seek to build are shifting with the technological tide. But, amid the disruption, the investment keeps coming. As an example, online payments processing company Stripe – launched a decade ago in the US by two Irish brothers – recently announced a major expansion:

The Irish have not had all the luck. Like Frankfurt, Luxembourg and other cities, Dublin sought to become the new home of the European Banking Authority, which was obliged to relocate from London, but lost out to Paris.

Looking ahead, the country’s government and those who speak for its financial services sector have plans and targets, even if not explicitly Brexit-related.

Financial Services Ireland, meanwhile, has set the objective that by 2025, Ireland will be a ‘top 20’ global financial services centre: an almost 50 per cent improvement on its present status, it acknowledges.

So where are we now with the Brexit saga? “The vast majority and the biggest relocations took place within two years of the UK referendum. Brexit business is still coming through but not to the same levels as 2016-2018 – it has certainly peaked,” reflects Donoghue. “We don’t expect a substantial second wave [of relocations], the bigger question is how companies that established or expanded in Ireland in response to Brexit scale their investment.”

Pointing out that EU financial capitals are seeing “the build-up of presence and balance sheets that was always going to be sequenced over a number of years”, Hayes has a similar view. “The next phase is scaling businesses – and the question of ‘scale’ needs to be looked at in the context of the EU single market and the advantages of passporting,” he says.

There will be ding-dongs to come as the UK and EU seek to thrash out the terms of their future relationship in financial services via the Joint UK-EU Financial Regulatory Forum (which follows the UK-EU ‘Memorandum of Understanding’).

It should be reassuring that a key player for Team EU is ‘one of their own’: Mairead McGuinness, the European Commissioner with responsibility for financial services (Ireland has long enjoyed excellent representation at senior levels in Brussels).

It seems inevitable that the EU and UK will diverge in the years ahead.

“In time we hope this forum can help to reset relations and that there can be a serious discussion around market access where it is in both jurisdictions’ interest,” says Hayes. “There are areas that require urgent attention, such as derivative trading and clearing, and other areas that require further consideration going forward. We think the time is right for serious discussions to get under way that serve to reduce fragmentation in markets and support regulatory alignment, such as in the area of sustainable finance or cybersecurity.”

But though Brexit has created opportunities in Dublin (and beyond), the hangover caused by the 52 per cent of Brits who voted Leave almost five years ago pounds away in the background.

“No doubt Ireland has benefited from Brexit in financial services in the short term but I think the loss of London as a world leader in financial services will hurt us all in the end,” O’Reilly says. “It’s Greek tragedy. Eventually it will all be in Asia and we will wonder when that all started. For the avoidance of doubt, it was Brexit.”