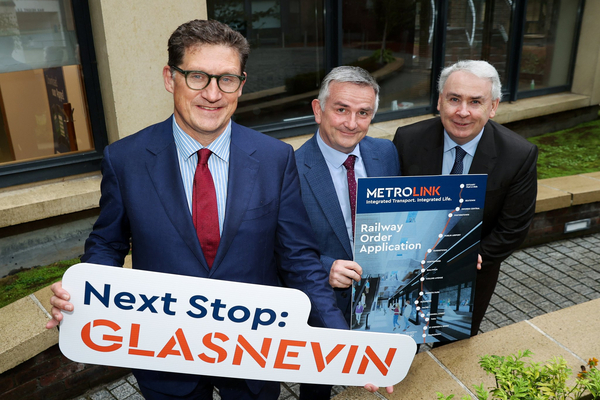 The Minister for Transport Eamon Ryan has welcomed the progression of MetroLink to the next major milestone, with the submission of a planning application from Transport Infrastructure Ireland (TII) to An Bord Pleanála for the rail route.

This planning application (Railway Order) marks a key stage in the development of the ambitious MetroLink “megaproject”. MetroLink consists of a new fully segregated railway, most of which will be underground, between the Swords area and Charlemont in the south of Dublin City Centre. The route will serve multiple residential communities such as Swords, Ballymun and Glasnevin, as well as Dublin Airport, the City Centre, and major employment, education and other facilities.

By interchanging with heavy rail, DART, Luas and bus services, MetroLink will connect to more than a million people in the Dublin area and more across Ireland. This key national project will enhance accessibility and connectivity, improve the quality of the urban environment in Dublin, and help to decarbonise the transport sector.

Minister Ryan commented, “in July I secured Cabinet agreement to progress the major MetroLink project. I am delighted that today we have met our commitment with the submission of a planning application for the route. Securing planning approval is vital for MetroLink and I am keen to see construction on the project start as soon as possible.”

“MetroLink is a flagship project, but it is also one of a suite of major public transport investments that we have secured ongoing funding for within Budget 2023, underlining the commitment in the Programme for Government and in the Climate Action Plan to transform the way people can move around both our cities and rural Ireland.”

Chief Executive of TII, Peter Walsh, commented, “I believe that MetroLink will enable truly sustainable development for the country, and I call for the support from all stakeholders to facilitate its timely progression through the planning process.”

Dependent on the outcome of the planning and procurement processes, construction of MetroLink is earmarked to commence in 2025 with a view to operation in the early 2030s. In the meantime, there are many other public transport projects in progress across the country: