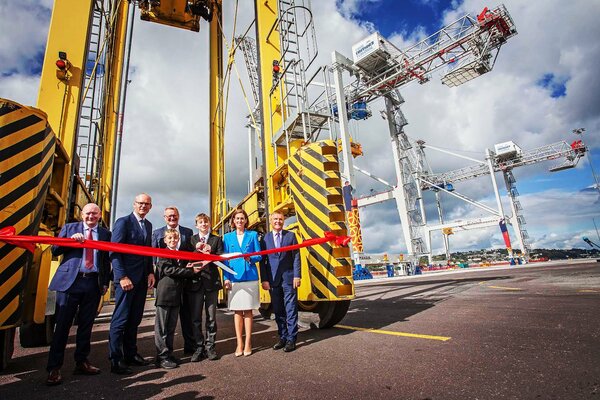 The Port of Cork company is set to target new global routes served by some of the world’s largest container ships following the opening of its new multi-million euro container terminal.

The ambitions were outlined as the company celebrated the official opening of the €89m Cork Container Terminal (CCT) at its deepwater facility in Ringaskiddy, which represents one of the largest single investments in marine infrastructure in an Irish port in a century.

The facility, which has been developed on a 39-hectare site over the last four years, has the capacity to handle 330,000 twenty-foot equivalent units (TEUs) of cargo annually, generating some 400 truck movements daily.

However, it must operate at 50% capacity pending the completion of the M28 upgrade between the city and Ringaskiddy. Once the motorway is built, the CCT will ramp up to full capacity.

Port of Cork company commercial officer, Conor Mowlds, said while the port’s operations have transformed since Brexit, the new terminal, which became operational in April, is a game-changer.

It sits alongside one of the largest deepwater, multimodal berths in the world, which at 13-metres deep and 360-metres long, can handle some of the world’s largest container ships.

Mowlds said, “we now have direct roll-on, roll-off routes to Belgium and Holland and we have Ireland’s only deep-sea link to the US.bBut this new facility will allow us to add additional links to other parts of the world and we will be able to accept some of the largest container ships in the world, once the facility is operating at full capacity.”

Crucially, the port will be able to accommodate the vast Panamax class container ships which can carry 4,000 TEUs. And the CCT can now store hundreds of refrigerated or temperature-controlled units – crucial for the transportation of various food stuffs, ingredients, pharmaceutical products or raw materials.

The new CCT provides more efficient container handling facilities which should help reduce the costs of trade, and ultimately help to reduce inflation and the cost of living, and once fully operational, it will have significant economic benefits for Cork and the Munster region, as well as the national economy, the company said.

The CCT was officially opened by Foreign Affairs Ministers Simon Coveney, Public Expenditure Minister Michael McGrath and Minister of State at the Department of Transport, Hildergarde Naughton, who has special responsibility for transport and logistics.

Minister Naughton said transport accounts for more than 90% of Ireland’s international trade and she said the Port of Cork has played a key role in keeping Ireland connected as part of the global supply chain, stating, “the CCT is already strengthening Port of Cork’s position on a global scale and on completion of the M28 will welcome further increased capacity for international transport and trade. It is also important to acknowledge the port’s success in completing the project despite the challenges brought about in recent years by Covid-19 and Brexit.”

“The Port of Cork and Dublin are the only ports in Ireland capable of servicing all six shipping modes – lift-on/lift-off, roll-on/roll-off, liquid bulk, dry bulk, break bulk and cruise. On that basis, the Ringaskiddy re-development will be beneficial not only to the Port, its customers and Cork, but to the entire country.”

He said the company is preparing a masterplan to guide its development up to 2050 and he invited the local community, port customers and national stakeholders to engage in public consultation on the draft plan, which should be published in early October.

It is understood it will set out its vision for relocating its operations at Tivoli downstream, its development of Marina Point, and how it plans to explore opportunities facilitating the development of the offshore renewal energy sector.

Port of Cork CEO, Eoin McGettigan, said the port wants to work with its colleagues, neighbours and customers to make sure that the development of the Port of Cork is something that everyone is proud of.

In 2021, the ports of Cork and Bantry reported a total consolidated traffic throughput of 10.6m tonnes in line with 2020. Thirty-five of its top customers are in the med-tec, pharma, IT, chemical and agri-food sectors.