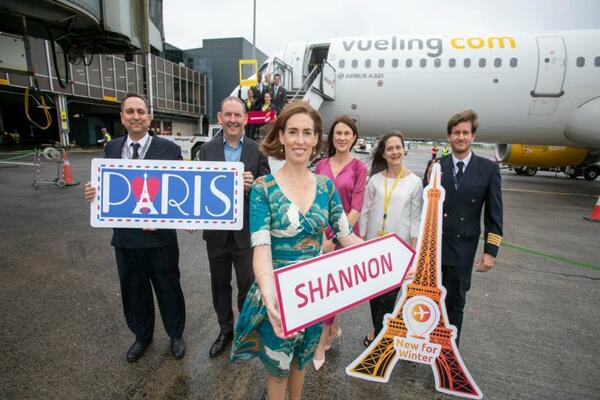 There was an air of excitement at the departures gate at Shannon Airport for passengers bound for Orly Airport, as the first flight to Paris took off for the French capital.

The twice weekly service to Paris Orly Airport, with brand-new carrier, Vueling, will operate on Mondays and Fridays from Monday, September 12, offering affordable flights to the french city.

Orly Airport is the nearest airport to the centre of Paris, just 13km from the city. It is the second largest airport in France and provides onward connections to major European cities and Middle Eastern countries.

Minister of State for Transport, Hildegarde Naughton TD said, “a connection to Paris Orly not only provides significant opportunities for the people within this region, but also for inbound traffic from Paris – further boosting tourism connections between the Mid-West of Ireland and Paris.”

The first passengers to jet off from Shannon to Paris were treated to a taste of France at the blue, white and red dressed gate area before they boarded.

Freshly made crêpes by a French chef were served in celebration of the new service, along with a Parisian themed cake.

Dr Loïc Guyon, Honorary Consul of France for the Midwest region, congratulating The Shannon Airport Group on the new service said, “the new Shannon / Paris Orly connection, the second connection to Ireland’s closest EU neighbour, will be a huge boost to French tourism to the West of Ireland and to Irish tourism to France, but also for businesses located in the airport’s catchment area.”