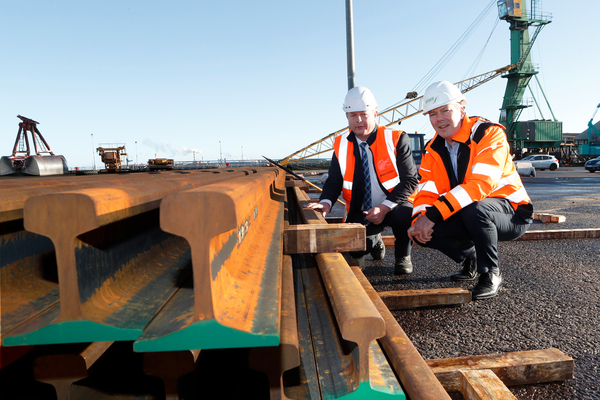 Shannon Foynes Port Company Chief Executive Pat Keating has welcomed that the arrival of the first consignment of tracks at Foynes Port for the reinstatement works for the Limerick to Foynes rail as another positive moment in delivering on the unprecedented opportunity for the transformation of the Shannon Estuary into a global floating offshore wind energy and Irish supply chain hub.

Keating said, “just ten days ago we launched our updated masterplan Vision 2041, setting out why the Shannon Estuary is best placed in Ireland and Europe to develop the Atlantic floating offshore wind industry and identified, among many other elements, the reinstatement of the rail link to Foynes as a key piece of supply-chain infrastructure for realising this opportunity. To be here less than a fortnight later watching the first tracks for the rail reinstatement programme loaded onto our port is a really positive signal of the intent around our plans. The enormous opportunity here will not be delivered without the support and involvement of key stakeholders. Iarnród Éireann is one of them and we are delighted to see this project getting underway.”

“The regeneration of the Limerick to Foynes rail line is, along with the Adare to Foynes road, one of two key transport links essential for delivering on this incredible opportunity for the estuary. Not alone will it be crucial to the supply chain for the transformation of the estuary into a floating offshore wind generation supply-chain hub but it will enable Foynes Port to add substantial freight capacity to the national supply chain at an uncongested point in the national transport network and help unburden pressure on the congested Greater Dublin Area network.”

Shannon Foynes Port has itself played a central role in the rail reinstatement project, securing €800,000 from the EU’s Connecting Europe Facility for a Feasibility and Detailed Design study in 2015.

The Vision 2041 report, which was launched by Minister for the Environment, Climate and Communications, Eamon Ryan TD, by international experts Bechtel set out a roadmap for Shannon Foynes Port to lead in helping Ireland meet its net zero obligations by 2050. The masterplan found that the Shannon Estuary would also contribute significantly to Europe’s efforts, through its REPowerEU plan, to unwind its dependence on Russian fossil fuel imports and accelerate the expansion of renewables. The full report can be downloaded here Vision 2041.

The potential electricity generation from the enormous renewable energy resource of the west coast winds can, the report estimates, deliver 30 gigawatts of floating offshore wind by 2050 – six times more than existing domestic demand. Significantly, this energy would also kick start a new industrial ecosystem based on the production of carbon free green electricity, hydrogen and derivatives, which will be transformational for Ireland by way of use for domestic electricity and e-fuels, electricity exports, and e-fuels exports.

At peak, up to 120 floating turbines would be installed offshore per year. The economic impacts would also be far reaching with thousands of jobs created and billions of euros invested in supply chain and route-to-market infrastructure and facilities around the region.