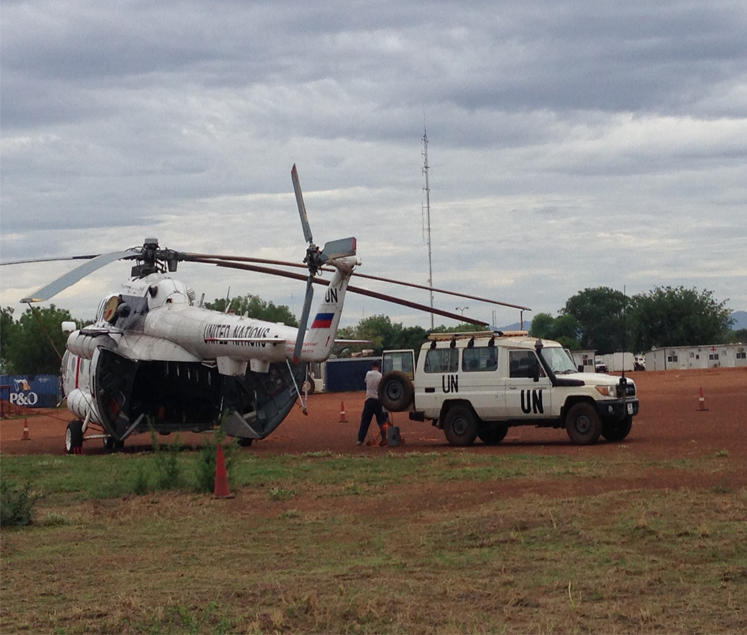 The mandate for the UN Mission in South Sudan (UNMISS) is to support the government of the Republic of South Sudan in peace consolidation and thereby foster long-term state-building and economic development. CDGA Consultants (based in Cork) provides advisory support and training to UNMISS staff in the area of logistics, supply chain management (SCM), transport technology and other managerial fields.

Pat Moriarty B.E., C.Eng., CMILT is a director of CDGA. He has extensive experience of working with clients, both industrial and international organisations in Africa, Middle East and Asia. In this article, Pat outlines the SCM challenges faced in central Africa.

South Sudan gained independence from Sudan in 2011 as the outcome of a 2005 agreement that ended Africa’s longest-running civil war. South Sudan is one of the most diverse countries in Africa. It is home to over 60 different major ethnic groups, and the majority of its people follow traditional religions. Independence did not bring conflict in South Sudan to an end. The 2013-2015 civil war displaced 2.2 million people and threatened the success of one of the world’s newest countries.
The population is estimated at approximately 12 million and its land area is almost eight times that of Ireland.

More than 14,000 UNMISS personnel, including police, military and civilians from at least 60 different countries, including locals, work to deter violence against civilians by providing a safe and secure environment for South Sudanese people. UNMISS personnel also work to facilitate the safe delivery of humanitarian assistance, such as food, clean water, shelter and healthcare, to the millions of displaced people. Almost all food, humanitarian and medical supplies are procured from international suppliers. Including the contingents, there are over 1,000 vehicles in the UNMISS fleet and significant numbers of passenger and cargo aircraft.

Effective SCM faces many challenges in the UNMISS theatre. These range from poor infrastructure to security and long lead times. Typically, inbound inventory is sourced from suppliers in countries such as UAE or China. Following the initial sea journey, it is from the bond port in Mombasa in Kenya onwards that difficulties may start to arise. The inbound inventory must first clear Kenyan customs before being loaded onto trucks. Entry into Kenya can sometimes suffer significant delays even with the best efforts of local clearing agents to smooth the process.

Following customs clearance, an UNMISS contracted haulage/logistics contractor (often 2PL or 3PL in SCM speak!) will collect the goods and begin the journey from Mombasa to Juba. This is a journey of almost 1,600 kilometres with two international frontiers – Kenya to Uganda and Uganda to South Sudan. While there are security risks associated with the journey from the Kenyan border to Juba, dealing with these security risks is the responsibility of the logistics company.

Whatever difficulties were encountered in the port of Mombasa, these will be amplified at the border crossing into South Sudan. Due to South Sudan being a young country (the world’s youngest in fact) and having been ravaged by lengthy independence wars, followed by a number of outbreaks of civil war, many of governmental structures that we take for granted are not yet firmly established. While this may lead to difficulties at border crossings, it also leads to risks from bandits and paramilitary groups. The appraisal and treatment of these risks is the responsibility of the contractor.

Aside from the security risks within the country, there are also serious infrastructural problems. Very few roads in South Sudan are paved, which can lead to mechanical problems in the trucks, resulting in more time delays. Poor road safety practices are also a problem. Some local drivers have little regard for even basic road safety norms. Livestock on the roads is another hazard that drivers frequently face. Many of the roads on the route are very narrow and some disappear altogether during the rainy season. So, the next time you are cursing rush hour on the M50, spare a though for these drivers heading for Juba!

Following the journey from Mombasa to Juba, the inventory will be unloaded from the trucks and manifested in the UN storage facilities. Juba contains the UNMISS’s primary logistics hub and is the point from which inventory is shipped to the various regional outposts. Many of the goods arriving in Juba are forwarded on to other regional outposts, including Wau, South Sudan’s second city, in the north west of the country and Torit in Eastern Equatoria state. Much of the difficulties associated with the journey from the Kenyan border to Juba are the same as those associated with these journeys. Security for these trips is provided by UNMISS, using its own contingent troops. The storing of goods is generally not a problem as they will be within base and protected by contingent troops.

CDGA Consultants continue to provide training and advice on all aspects of Logistics and Supply Chain Management to UNMISS to facilitate the efficient and effective flow and storage of goods, services and related information to and within the region. At the time of writing, a team from their Cork base will have arrived in Juba in early February 2018.

‘Data Dawn’: Making Up for Lost Time in Transport Planning