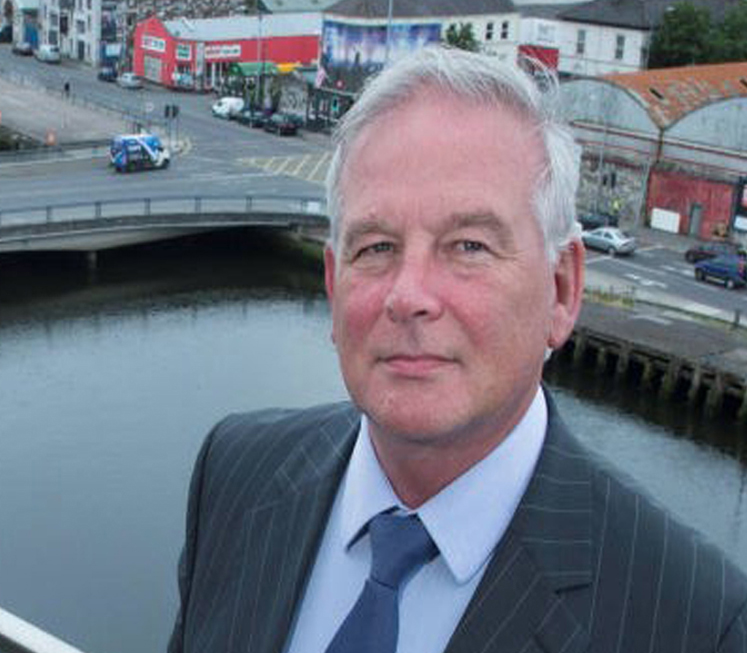 Brendan Keating FCILT, CEO of Port of Cork talks to Linkline about his career, the opportunities facing the business, his pastimes and the best career advice he’s received.

Could you give us a brief summary of your career history?

“For somebody who has spent 15 very rewarding years in the port sector and associated businesses, my background had been in the local government sector where I spent 25 years and equally a career which was most rewarding from my perspective and most enjoyable as well.

“I became city manager in Limerick in January 1999 and continued in that role until December 2002. Before that, I had been an assistant city manager in Cork City Council where I was for four and a half years and before that I spent 10 years in Meath County Council.

“All very progressive local authorities and I’m very grateful for the opportunities of development afforded to me by those particular organisations. I have a different background to most people you’d meet in the port sector but nevertheless, I hope I have been able to make a contribution over the last 15 years and I can take some consolidation from the fact the port has progressed and developed quite successfully in that period.

“My role as CEO has been to oversee the development of the company in this period.”

How did you transition into the transport and logistics sector?

“Working in Cork City Council in the period of the 1990’s I was always keenly interested in the port and I watched with great interest and read everything I possibly could about, as they were known then, Cork Harbour Commissioners. It was always a particular area of interest to me so when the opportunity presented itself I was delighted to go for it and play a role for the last 15 years.”

Could you describe your average working day?

“I am a great believer in working through a management team so my approach to my job is to empower and to develop the senior management team and enable them to continue to do their job.

“My role as leader of the organisation is one where I see my primary purpose is developing the vision and the strategies of the future development of the company.”

What opportunities do you see for the business?

“As we speak, there are significant opportunities for the Port of Cork company. We have a very ambitious port development proposal which we’re hoping to get commenced in the next number of weeks. That will see the company invest about 80 million in a new dedicated containment facility. That will require we now generate the business to support that particular investment.

“Equally there are other opportunities for the company such as the development of the cruise business and growing the business to date. In 2018 we have scheduled 96 cruise calls into the Port of Cork. Another area we are particularly excited about is the proposals for the development of a new LNG facility in Cork Harbour. With such a facility it will future-proof the port and it will also add significantly to our ability to accommodate ships, an ever increasing number of which are moving towards LNG technology.

“We have a new Spanish service twice weekly, a rocon service starting on May 1st, linking the Port of Cork with Northern Spain and more particularly with the city of Santander in the province of Cantabria. Added to that then we have Irving Oil who host the country’s only oil refinery, the Whitegate Refinery, who have very ambitious expansion plans which we’re hoping to come to pass and we’ll all benefit from that.

“So literally grow our trades and explore new trading opportunities to summarise.”

And on the challenges?

“The biggest challenge for all of us at the moment is the risks associated with Brexit and what will be the outcome of the current negotiating process. Will there be a free trade agreement or will there not be and the issues associated with that. If there is a free trade agreement, in my judgement, I think you will see increased degrees of regulation and maybe border controls, we’ll just have to wait and see. So how will that affect the movement of goods in and out of our ports?

“Another issue for us all today is the increasing costs of energy again, that’s a concern. An additional issue would be our labour costs and finally, from a ports perspective, we have to have capacity within our infrastructure to handle the growth in trade while we’re planning for it. Associated with that is the issue of road connectivity. From my perspective we’re very anxious to see the advancement of the M28 and also the N20 linking Cork with Limerick.”

What do you like to do outside of working hours and what are your pastimes?

“I like to read but more particularly I’m still fairly active. I like to cycle quite a bit. And of course I’m also a keen rugby supporter of Munster and Connacht.

“While I’d like to go more often to the sports grounds I’d follow very, very closely the recent successes of the Connacht rugby team.

What did you make of Ireland beating England last Saturday?

“That was an absolutely fantastic victory and I have to compliment the team and more particularly, if I may, the coaching staff because it was very evident to me that the team were expertly coached and each player knew the role they had to play and fulfilled that role excellently. I was particularly impressed by the Irish defence.

“They had a game plan and it was well thought through. It was very well executed both in attack and if I can again emphasise, I thought the second half defence by the Irish team was outstanding, as good as I’ve ever seen.”

What is the best career advice you’ve ever received?

“I’ve a number of people to acknowledge, above all we’re inspired by our parents and in this case, by my own father. His advice would be to work hard, work smart and ensure that you always understand what’s going on around you in terms of the early stages of your career and more particularly then as you get into senior management to understand your environment, understand what’s happening in it and have a sense of what direction it should go in to achieve the various different goals and objectives.”