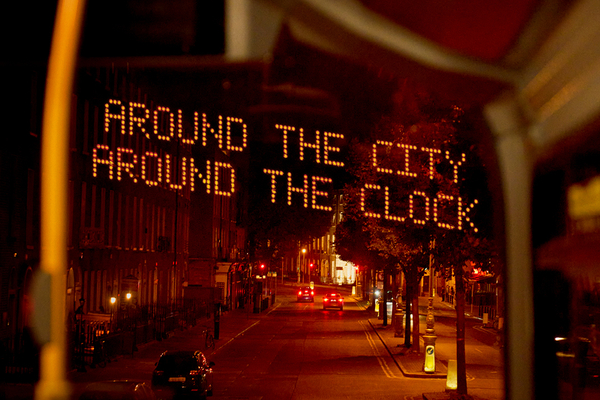 The TFI night-time bus network is growing, taking you ‘around the city, around the clock’ with 8 Dublin Bus routes now operating 24 hours a day, 7 days a week, and newly reduced fares on the 13 Nitelink services on Friday and Saturday nights.

Whether customers are coming home from a night out with friends or a late shift at work; they can use the night-time services for an affordable and reliable journey home.

With Dublin becoming a true 24-hour city, the TFI network will be introducing even more late-night services with two new 24-hour bus routes coming on stream before Christmas.

CEO of the National Transport Authority, Anne Graham said, “As a member of the government’s Night-time Economy Task Force, I am delighted that the TFI network is growing to support Dublin’s late-night economy. With eight 24 hour bus services and reduced fares on 13 Nitelink services, passengers can now get home for just €2.40 or less using a Leap card, making going out in Dublin more affordable. The TFI network is continuing to grow its late-night services, with more 24 routes being introduced on an ongoing basis as part of the BusConnects programme.”

Acting Dublin Bus CEO, Andrea Keane, added about the TFI night-time services campaign, “the night-time economy in Dublin is growing post-pandemic and the TFI Network is expanding to reflect that. Night-time commuters can now hop on Dublin Bus services to get home affordably. By using Dublin Bus to get home customers can also lower their carbon footprint.”