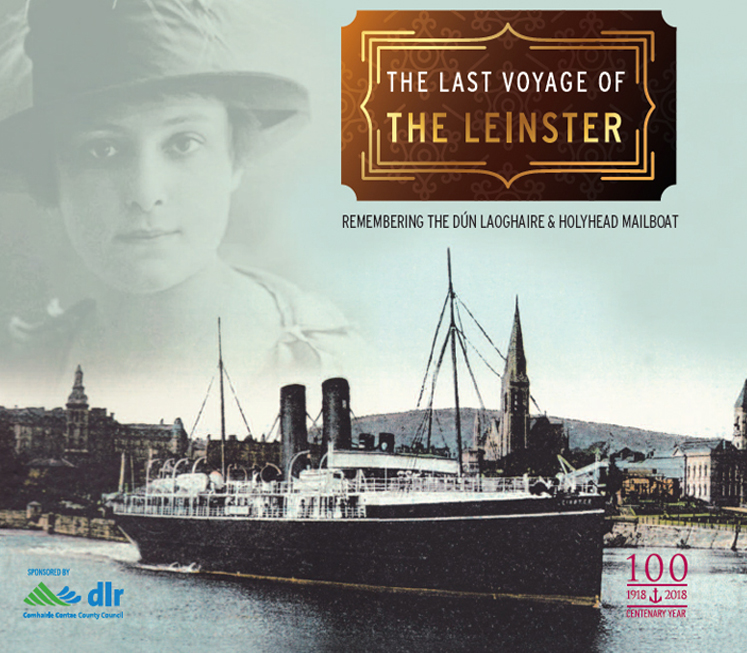 The sinking of the Mail Boat RMS Leinster in Dublin Bay on October 10, 1918 in a German U-Boat attack saw the loss of 550 lives and is the subject of a new book.

At the beginning of the twentieth century, the principal means of transporting individuals and goods between Ireland and Britain was the Mail Boat service which operated between Dún Laoghaire and Holyhead.

Up to the “Great war” of 1914 to 1918 there were four ships used on the route, each named after an Irish province; Munster, Leinster, Ulster and Connacht. The ships were operated by a private company called The City of Dublin Steam Packet Company. The carriage of mail between both countries was the central role of the service with postal workers sorting mail as the ship travelled. Carrying passengers between both port towns was another very important commercial activity. This created employment at times of dire poverty throughout Ireland and in the Holyhead area of North Wales.

When Britain declared war in 1914, the military authorities decided that all ships must be utilised for the war effort. As the island of Ireland was still under British rule the four mail boats were considered as part of the war effort. Following the German-French war of 1870, Germany retained lands which had previously been part of France and unsurprisingly this caused constant irritation to the French. The French were regularly encouraged by British Government Ministers to continue demanding back their lands. Nevertheless, the German empire had not become involved in any conflict in the years following 1870, and indeed this was true right up to 1914, which was in stark contrast to the constant campaigns and wars involving the British Army and Navy. “Britannia Ruled the Waves” in those years and they used that power to restrict movement of shipping and therefore worldwide trade.

The German economy, thanks to advancements in technology, was seeking new outlets for their goods world-wide. Britain, by ruling the waves, curtailed these exporting efforts by Germany. Continued control of the sea restricted the German trade development along with various regional conflicts around the world, including the French-German tensions, led to Britain declaring war in 1914. The cause of “Catholic Belgium” was used as a reason for the declaration of war, but British Government ministers later admitted that they would have declared war in any case.

For Britain the main reason for war was control of the seas and therefore world trade. With the outbreak of war, the British war office took control of all shipping in these islands. The City of Dublin Steam Package Company was ordered to make its ships available for carrying troops. The Leinster Mail Boat was ordered to retain 500 spaces on all of its sailings for soldiers, while sister ships were given other war time tasks. On a number of occasions, paying passengers revolted when they were refused permission to board the Leinster Mail Boat due to the number of soldiers travelling.

At a few minutes before 9.00a.m. on 10 October 1918, just one month before the end of the war, the Mail Boat Leinster departed Dún Laoghaire for Holyhead as usual. Postal workers, the crew, nurses returning to work in Britain, ordinary passengers and British soldiers returning to the war following vacation in relatively war free Ireland were aboard the ship. At approximately 9.45 a.m., when the ship had passed the Kish bank and light, the German U Boat 123 attacked. The first shell missed he Mail Boat Leinster but the second one hit the postal sorting office and all postal sorters, except one, were killed instantly. A second torpedo hit the ship and in all over 550 people died and hundreds more barely escaped with their lives. Most of the dead were Irish and Welsh, however other nationalities that died were English, Scottish, Canadian, and American. There were also some individuals from New Zealand and Australia.

One hundred years on, the number of descendants of those who were on the ship has now reached several thousand and for most of them the centenary was of the utmost importance. The principal commemoration event took place on Wednesday 10 October 2018 and included an early morning boat trip to the site of the ship’s wreck, a major commemoration commenced at 9.00a.m., followed by a civic reception and a Centenary Lunch in the National Yacht Club, just a stone’s throw from where the ship departed on its final journey.

On the centenary year (2018) of the disaster a very important book on the tragedy was published entitled “The Last Voyage of the Leinster”. Some copies are still available from Eason or directly from the Mail boat Leinster Centenary Committee at 3 Eblana Avenue, Dún Laoghaire County Dublin. €20 per book includes postage. The same committee has already put in place a series of events planned for 7 to the 10 October next with people already booked to attend from all parts of the world.

As published in the Church of Ireland Gazette on Friday, October 18, 1918.

The Leinster.
For us in Ireland the gladness with which we greet the rapid approach of a victorious ending to the war has been overshadowed by the tragedy of the Leinster. It is a tragedy made the more poignant by the thought that, after four years of war in which-though cumulatively the loss of Irish life at sea has been heavy-no such giant disaster has befallen our shipping, it should come as, perhaps, the last of Germany’s crimes against the great sea-faring traditions of self-sacrifice and succour. The Primate, in his sermon at Rathfarnham last Sunday, recalled in this connection the awful passage in Revelation in which we are told that the devil had gone down with great rage because he had but a short time to live. With Germany’s guilt in this foul crime and what it must imply at this moment when she is suing for peace we deal elsewhere in these pages. But our first thought must be that of offering what comfort is possible to the bereaved. We cannot do so better then by reproducing here a striking letter from Canon Pim, of Kingstown, published in the daily Press.

“It seemed to me,” he writes, “that it might be a comfort to some of those who are mourning the victims of the Leinster outrage to know of the following:- On Saturday afternoon last there was a bank of cloud on the horizon, and against clear sky above it there appeared for some moments the the form of a great white cross, of absolutely perfect shape. It was seen by at least four members of my own household, not all of them together, or from the same place, as well as by other people. And one of the witnesses described it to me that it had seemed to him first as if there were a great could Figure, with outstretched arms, which assumed the form of a cross, and, as the sharpness of its outlines passed, it ‘seemed to be full of the faces of men and women.’ It was just, as it were, over the place where the disaster had happened. One presumes to offer no explanation, but it was certainly there, and at the least it was a symbol of surpassing comfort.”

Ireland’s Duty.
In many sermons in our churches last Sunday reference was made to the loss of the Leinster. In all of them the note struck was that of the duty of the young men of Ireland to do their part in avenging the murder of Irish women and children. We may quote briefly from two of them. “For one reason or another,” said the Archbishop of Dublin preaching in Christ Church Cathedral, “The young men of Ireland have not taken to heart the perils with which the war threatens their own country women. Now, at last, surely the revelation has come that this is Ireland’s war and Ireland’s opportunity to redeem her shame. Here is the proof written in blood that an Irishman’s place of duty now is among the fighting men who are struggling to remove the horrible menace of Prussian militarism, with all its cruelties and barbarisms, from the face of the Earth.” Again, to quote Dr. Hemphill’s words at St. Patrick’s Cathedral, “many people in Ireland have been devoid of imagination, through personal immunity from the horrors of war; but can they any longer ignore them? To do so would be a great moral danger. It would amount to a self-education in callousness. It would be a conscious blunting of the sensibilities that God planted in our bosoms.” We do not know whether this horror will stimulate the supply of recruits from Ireland. But we are very sure that, as the Archbishop of Dublin said in his address to the Dublin Diocesan Synod on Monday, “if we fail to do our utmost we shall live to rue our apathy and half-heartedness; we shall be ashamed in the face of Christendom in the days to come.”

Irish Churchmen at least the loss of the Leinster should stimulate, in great matters and in small, in the Archbishop’s words, to “show our fellow-countrymen that we are ready to bear the burden which this war of freedom has laid upon us. They will not think the less of us for that, whether they follow our example or no.” Here let us deal with a correspondent’s misconception, expressed in a letter in this issue, of our remarks last week that “we are very far from satisfied that our clergy general have done their best to assist the recruiting campaign.” It should be unnecessary for us to say that we are not referring to the sons of the clergy. As our correspondent himself recalls, our own past issues have borne witness to the noble manner in which the sons of the clergy have done their part; and we may add our tribute to the services of many of our younger clergy as chaplains to which the Archbishop of Dublin referred in his address on Monday. We venture to say, indeed, that no class in Ireland, in proportion to its numbers, can show as fine a record in the war as the families of the clergy. What we had in mind in our remark last week was the vigorous cooperation of the clergy in the Recruiting Council’s campaign. Last Sunday special recruiting appeals were made in our churches in Belfast. When that was done in every diocese and in every parish throughout Ireland we shall be satisfied that the clergy generally have done their best to assist the recruiting campaign.