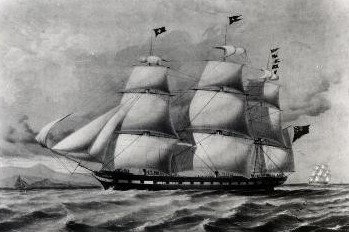 On the 21st of January 1854 a major Maritime tragedy occurred in Irish waters. The RMS ‘Tayleur’ ran aground off Lambay Island, Dublin, and sank with the loss of over 350 lives. The Tayleur was a full rigged Iron Clipper Ship which was built and launched at Warrington on the River Mersey in 1853. The master of the ill-fated vessel was Captain John Noble. Like the ‘Titanic’, RMS Tayleur sank on her maiden voyage. She was bound for Melbourne Australia with a compliment of 652 passengers and crew. The new vessel was chartered to White Star Line – (This line had no connection with the ‘Titanic’ White Star Line).

The official enquiry into the disaster found that the main cause of the sinking was that the vessels compasses did not function properly because of the ships iron hull. Approximately 48 hours after her departure from Liverpool the vessel was seriously off-course and ran into heavy fog and storm as she struck rocks off Lambay Island and sank quickly. It was also determined during the official enquiry that other items of ships equipment were defective or inadequate and that some crew members did not have adequate seamanship training.

The full story of this horrific tragedy is now told in a new book to mark the 160th Anniversary of the sinking. Details of the book are as hereunder.