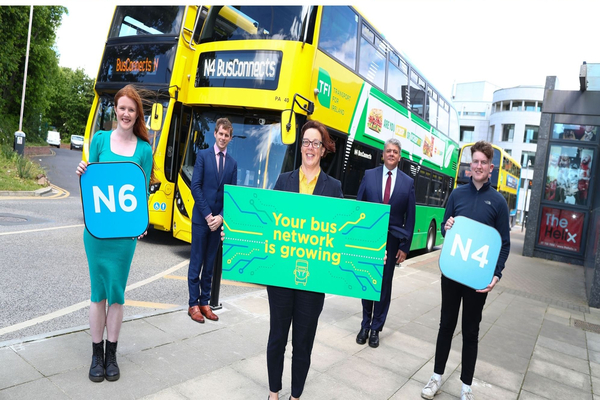 The NTA in conjunction with Dublin Bus and Go-Ahead Ireland have launched the third phase of the new BusConnects network for Dublin, as part of the Transport for Ireland network. This phase, which took effect on May 29th, includes two new orbital routes the N4 and N6.

As orbital routes, N4 and N6 provide fast and frequent bus services between communities across north Dublin, without requiring customers to travel into the city centre. They represent a very significant improvement and enhancement of the existing 17a.

N4, which will be operated by Dublin Bus, will connect Blanchardstown Shopping Centre with the Point Village, via Finglas and Dublin City University, 24 hours a day.

There is a 10-minute frequency on both the N4 and N6 at most times on weekdays and Saturdays, with lower frequencies on Sundays.

An interchange bus stop to allow customers transfer between the N4 and N6 has been installed in Finglas Village. Thanks to the TFI 90-minute fare, there is no additional cost incurred for transferring from one to the other. The 90-minute fare has recently been reduced by 20% to just €2 until the end of the year. The fare for students and young adults is just €1.

Minister for Transport Eamon Ryan TD said, “this launch marks another achievement for the ambitious BusConnects project. These new services will better connect areas in the north of the city. They will provide an easy, accessible, and more sustainable way for people to travel from Howth to Blanchardstown and into the Point and the North Quays in the city centre. This latest phase of the new network provides communities in these areas not just with increased frequency, but also a night service offering commuters 24-hour bus connections. This will enable more commuters to rely on public transport for all their needs and further reduce the need for cars on our roads.”

Anne Graham CEO of the NTA added, “this is the third phase of the new Bus Connects network and customer response to Phases one and two has been really positive. Passenger numbers on Phase 1 services – the H-Spine and related services introduced in July 2021 – are running at 22% ahead of background growth on bus passenger numbers. The figure for Phase 2 – the C-Spine and related services introduced in November 2021 – is 12%. It’s clear that the new network is persuading more and more people to use the bus.”

“This launch is one further step in the delivery of an effective and efficient bus service for the Dublin city region. The network is beginning to take shape and we are confident that this Phase will be just as successful as the previous ones.”

Ray Coyne, CEO of Dublin Bus commented, “this is a very positive day for Dublin Bus and our customers. The launch of the new N4 route will provide people across west and north Dublin with 24-hour direct access to the docklands and key parts of the city’s business district.”

“Crucially, it will also connect Blanchardstown to Point Village via Finglas, Glasnevin, DCU, and Clontarf. This will bring increased capacity, frequency and more connections for customers looking to use to other public transports such as commuter rail, DART and Luas. The N4 will be the sixth 24-hour Dublin Bus service, demonstrating our commitment to meeting the changing needs of customers and the city. The introduction of the N4 and other orbitals will also help us increase growth in public transport usage, combat climate change and mitigate congestion by making bus services a better, quicker and more reliable option.”

Andrew Edwards, Managing Director of Go-Ahead Ireland concluded, “we are delighted to continue to work closely with our colleagues in the NTA and Dublin Bus to deliver the next phase of the BusConnects network. Not only will the new high-frequency N6 orbital improve connectivity between the north-east of Dublin and the west side of the city, but it will also offer more services to Beaumont hospital. We look forward to serving the communities along the route.”