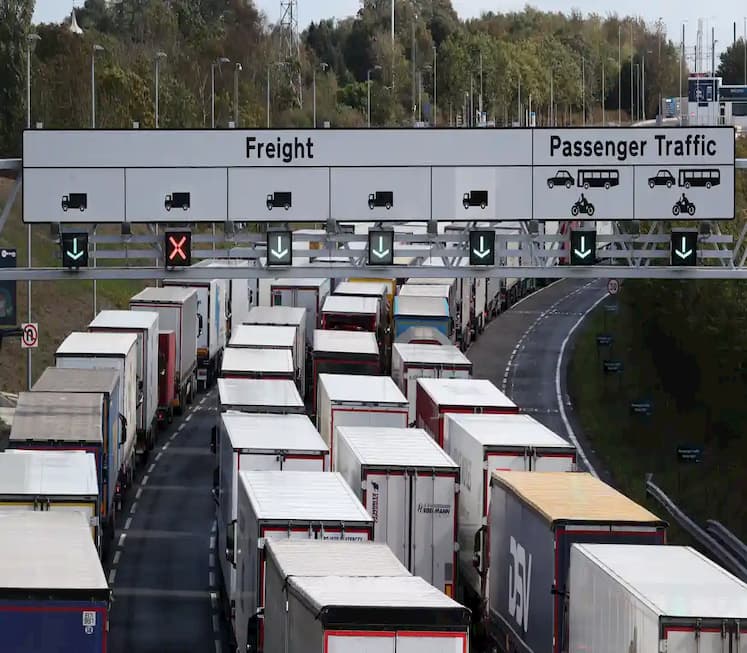 The government has announced plans for up to 10 inland sites to cope with Brexit congestion and border checks including in Birmingham, Warrington and at a former airfield near Epping Forest in Essex.

The inland border sites are being acquired to relieve ports including at Dover and Liverpool and could be in place for up to two years, according to one of councils where the planning process for infrastructure has already begun.

Among the proposed sites is a second facility for Ashford in Kent, adjacent to the recently acquired “Mojo” lorry park that will enable “about 2,000 HGVs” to queue on the coast-bound carriageway while other traffic continues to flow in both directions.

The details were disclosed in a long-awaited update on the government’s border operating model and are part of the plan to avert congestion and queues of up to 7,000 trucks in Kent.

On Wednesday Michael Gove, in charge of implementing Brexit, said of the potential for chaos in Kent: “If things do go wrong, then to paraphrase Rag’n’Bone Man – put the blame on me.”

The document sets out new rules for border controls for travelling with EU member state national ID cards, no longer acceptable from 2021 when passports will be mandatory for entry to the UK.

It also confirms that hauliers will need a “Kent access permit” to get into the county if they are heading for a ferry in Dover or a Eurotunnel train in Folkestone as part of congestion management.

The government says it will be putting new infrastructure in place at Ebbsfleet international station in Kent, North Weald airfield in Essex and Warrington in the north-west.

Along with the second Ashford site – which would be used for processes around transit including “passport for goods” checks – two further sites are being considered primarily for the same processes in Thames Gateway and Birmingham. Additional potential sites could be put in place by July next year in Holyhead, Fishguard/Pembroke and Dover.

Industry leaders including the Road Haulage Association, which Gove has accused of not being “constructive”, welcomed the report.

The government had identified 29 areas last month for potential use for border infrastructure but has already stood some of these boroughs down. Medway council in Kent said it had been notified by the government that land in its area would not be needed.

Anglesey council has already rejected an approach for a potential customs facility at an agricultural showground near Holyhead, the second busiest roll-on roll-off ferry port in the country. One executive at the council, Carwyn Jones, said: “They can’t sit in London and just look at Google Maps, and we can’t be strong-armed into accepting a site that isn’t appropriate.”

Essex county council said: “HMRC is proposing to use and operate North Weald airfield as a common transit convention (CTC) site. This is not a lorry park, but a customs facility which enables exporters to defer paying duties when importing goods into Europe. We expect HMRC to engage stakeholders, including local residents, shortly as part of its planning application under special development order legislation. The site will operate alongside other inland border sites in Kent for up to two years.”

The 138-page document will be a must-read for all hauliers and businesses and particularly the estimated 145,000 companies that have never traded outside the EU. They will have to become familiar with complicated processes including customs declarations on both imports and exports and sanitary and phytosanitary checks on both sides of the border.

Also to be put in place will be checks for endangered fauna and flora, which may take place away from ports such as Dover and Liverpool, where there is no capacity near the docks.

The government confirms that “it is the UK’s intention that EU, European Economic Area and Swiss citizens will not be required to obtain a visa” and they will continue to be be able to use electronic passport gates at airports.

The document reminds members of the public who want to travel to and from the EU with pets that the documentary requirements will change. If the EU accepts the UK as a “part 1 listed third country” the checks will be similar to now but the UK is urging pet owners to get necessary veterinary checks in place four months before travel as a contingency.

At the Borderline: The Realities of International Trade